Richmond, Virginia — Andy and Jennifer Parsons didn’t think their hearts could handle a new dog after they lost the dog they had for 13 years last month.

“We are definitely dog people and we miss her and we miss the presence of a dog,” Jennifer said.

When they heard Richmond Animal Care and Control was allowing people to foster a pet for two weeks around Thanksgiving, they gave it a try.

“We just thought it would be helpful to get a little bit of some dog back in the house and not really have to feel like we’re committing right off the bat,” Andy said.

Shelter director Christie Chipps Peters matched the Parsons with a 2-year-old pitbull named Squirmy. “I love her so much. I’m so glad she’s with you,” she told the couple. 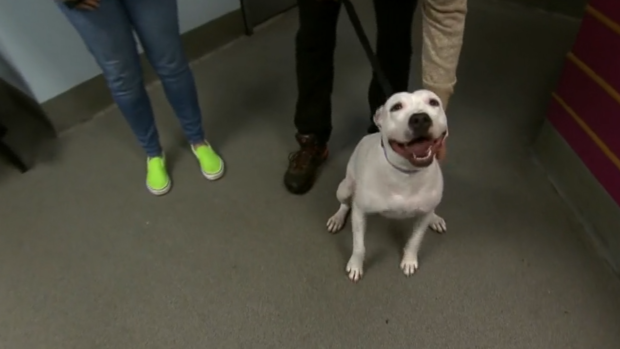 A pitbull named Squirmy was adopted by her foster parents.

Allowing people to foster animals over the holidays can help ease loneliness for both people and pets, Chipps Peters said.

“I was thinking about how full our shelter was of all these animals that just wanted to be loved, and thinking about the people out there that may be alone for Thanksgiving that want the same thing — and so if we could connect the two maybe it would be a really beautiful thing,” she said.

Foster parents end up adopting the animals more than half the time, according to the animal shelter — and that’s exactly what the Parsons did.

“It’s almost like it was the perfect dog for us,” Andy said.