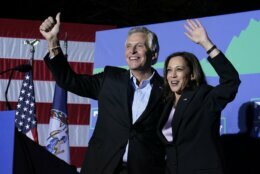 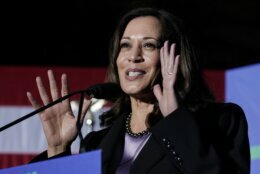 DUMFRIES, Va. (AP) — Vice President Kamala Harris traveled to the Washington suburbs on Thursday night to campaign for Democratic candidate Terry McAuliffe in a Virginia governor’s race that she acknowledged looks closer than once expected.

“This race is tight,” Harris told hundreds of cheering supporters in a parking lot outside a county fire station in Dumfries, about 30 miles south of Washington and part of fast-growing Northern Virginia, which has been a key driver in turning what was once a red state more reliably blue. “And we got to make it clear, Virginia, that we’re paying attention. We got to make it clear that we’re not taking anything for granted.”

Though Republicans haven’t won statewide office here since 2009, recent polls show McAuliffe — who was governor from 2014 to 2018 — in a potentially close race with Republican former business executive Glenn Youngkin. Harris is part of a parade of Democratic stars coming to the state to try to energize their base in an off-year race the party hopes can give it momentum heading into 2022’s midterm election — when its narrow control of Congress is on the line.

Youngkin toured a Boys & Girls Club in the Richmond area on Thursday. Both he and McAuliffe are doing bus tours for the weekend with Election Day on Nov. 2 now looming.

Harris, who turned 57 on Wednesday, laughed and looked at McAuliffe as some in the crowd sang a bit of “Happy Birthday” at the start of her speech. “You know what I want for my birthday? I want this man to be elected governor,” she said.

Harris had already recorded a video praising McAuliffe that his campaign says will air at 300-plus churches statewide before Nov. 2. Her stop in Dumfries follows first lady Jill Biden visiting suburban Richmond last week and former Georgia gubernatorial candidate Stacey Abrams speaking at a trio of Black churches in Norfolk — and planning to return this weekend for a rally in the college town of Charlottesville.

Atlanta Mayor Keisha Lance Bottoms also campaigned for McAuliffe, and former President Barack Obama will be here this weekend. President Joe Biden is set to be in the Washington suburb of Arlington next week, his second swing through Virginia during McAuliffe’s campaign.

Harris said Thursday that, “The president will be here and is always with Terry.”

“We’ll have no illusions here. In 2020, Kamala Harris was elected vice president and Joe Biden was elected president,” McAuliffe said.

He didn’t call the race close, but said, “I don’t want you sleeping for the next 10 days. I need you on. Game on.”

Youngkin seized on the issue after McAuliffe said during a gubernatorial debate last month, “I don’t think parents should be telling schools what they should teach.” McAuliffe, meanwhile, has for months attempted to tie his opponent to Trump, who lost Virginia to Biden by 10 points last year.