A federal judge on Wednesday appointed a three-judge panel to hear arguments on whether candidates who win election this year to Virginia's House of Delegates should be forced to run again next year.
Listen now to WTOP News WTOP.com | Alexa | Google Home | WTOP App | 103.5 FM

A federal judge on Wednesday appointed a three-judge panel to hear arguments on whether candidates who win election this year to Virginia’s House of Delegates should be forced to run again next year.

All 100 seats in the House are up for election in November; delegates typically run for a two-year term.

In a normal year, November’s elections would be the first conducted under constitutionally required redistricting under the 2020 census. But the census result s were badly delayed this year, and the state has been forced to run elections under the existing legislative boundaries because new ones still have not been drawn.

A lawsuit filed in Richmond by former Democratic Party Chairman Paul Goldman acknowledges that little can be done this year but conduct November’s balloting under the existing lines. His lawsuit, though, argues that new elections must be held in 2022 under newly drawn lines that properly align legislative districts with population shifts that have occurred in the state.

Failure to do so, he argues, would violate the “one man, one vote” principle outlined by the U.S. Supreme Court and give southwest Virginia, which has lost population, more representation than it is due at the expense of growing regions like northern Virginia.

The attorney general’s office sought to have the lawsuit tossed out, but U.S. District Judge David Novak ruled it can move forward. On Wednesday he appointed two other judges, 4th Circuit Judge Stephanie Thacker and U.S. District Judge Raymond Jackson, to hear arguments on the case. His ruling says three-judge panels are required to hear cases involving constitutional challenges over legislative apportionment.

As it stands now, there is no clear answer to whether the next House elections will be in 2022 or 2023.

Democrats currently hold a 55-45 majority in the chamber, but Republicans are hoping to win back control in November. Whichever party controls the body after the November elections will have little incentive to push for new elections in 2022 that could cost them their majority. 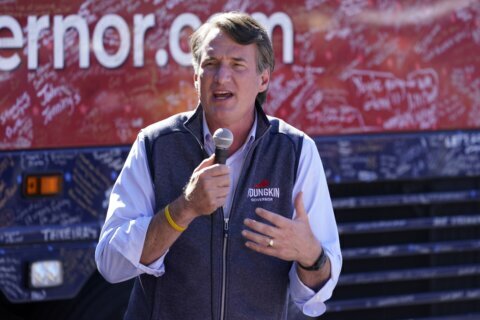 ‘He’s not coming’: Youngkin says Trump not on his way to Va. for campaign