U.S. Sen. Mark Warner of Virginia and his Republican opponent Daniel Gade sparred over the dangers of the conoravirus, when to fill a vacancy on the Supreme Court other topics Wednesday during their first debate in a little-noticed Senate race.
Listen now to WTOP News WTOP.com | Alexa | Google Home | WTOP App | 103.5 FM
(1/2) 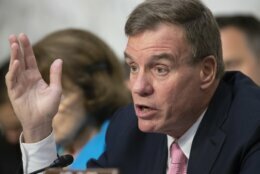 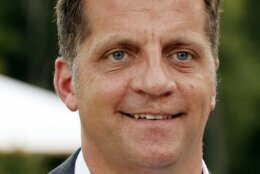 RICHMOND, Va. (AP) — U.S. Sen. Mark Warner of Virginia and his Republican opponent Daniel Gade sparred over the dangers of the coronavirus, when to fill a vacancy on the Supreme Court and other topics Wednesday during their first debate in a little-noticed Senate race.

Warner, a Democrat and former governor, is the heavy favorite to win re-election for a third Senate term despite the fact that he almost lost six years ago. Virginia has tilted heavily Democratic since then, thanks to the large population growth in urban and suburban areas and President Donald Trump’s unpopularity in the state.

The race has been overshadowed by the presidential contest and more competitive races in other states that will determine partisan control of the Senate.

At Wednesday’s debate, held virtually due to the coronavirus pandemic, Gade tried to gain ground by attacking Warner as a career politician who flip-flops on key issues.

Warner pitched himself as a business and tech-savvy moderate who is well-known to Virginians. He dismissed Gade’s attacks as theater.

“President Trump has been shown by the Washington Post to have committed over 20,000 lies in his tenure. It appears my opponent is actually trying to catch up with him today,” Warner said.

Gade is a professor and a retired Army officer who was seriously injured in Iraq in 2005, losing a leg after his Humvee was hit by a roadside bomb. He advised President George W. Bush on military and disability issues and was Trump’s appointee to serve on the Equal Employment Opportunity Commission, but withdrew his nomination after a lengthy delay in the Senate over his confirmation.

“I have a pre-existing condition myself because I got my leg blown off in Iraq … that’s not who I am, it’s a lie,” Gade said.

The pair sparred over whether the Senate should fill a Supreme Court vacancy after the death of Justice Ruth Bader Ginsburg last week. Warner said the spot should not be filled until after the election, noting that early voting has already started in Virginia.

Gade said the Senate should move ahead and said the court needs nine members in the “unlikely but dangerous” event of a contested election.

Warner criticized Gade for not wearing masks at some campaign events and downplaying the virus’ seriousness. Gade said he wears masks where appropriate, but noted that Virginians will be dealing with the virus for a long time.

“What we can’t do is give into fear,” Gade said.

Wednesday’s debate was the first of three planned before Election Day in November. It was sponsored by the Northern Virginia Chamber of Commerce, George Mason University’s Schar School of Policy and Government and NBC Washington.