More than 1,000 gather in Richmond to oppose abortion bills

Both the Virginia House and Senate have passed bills to undo restrictions on abortion access that were enacted when the legislature was under GOP control.
Listen now to WTOP News WTOP.com | Alexa | Google Home | WTOP App | 103.5 FM
(1/5) 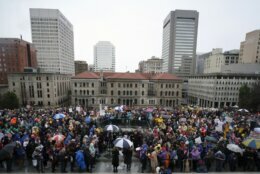 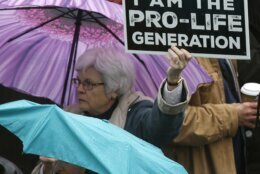 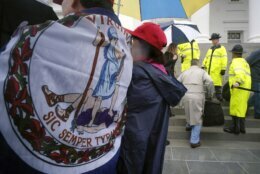 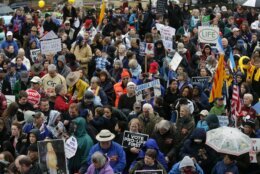 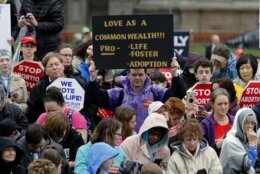 RICHMOND, Va. (AP) — More than 1,000 people rallied at the Virginia Capitol on Thursday, protesting legislation advancing in the Democratic-controlled General Assembly that would ease restrictions on abortion access.

Speakers urged the crowd that gathered in a steady rain to pressure lawmakers to vote against bills that they say would undo regulations that protect pregnant women. They encouraged attendees to join anti-abortion advocacy groups to push back against Democrats who retook control of the General Assembly in November, and they vowed to unseat members of the new majority.

“Virginia has taken a wrong left turn. But we’re here today to let all inside this Capitol know that we will never rest and we will never relent in our commitment to putting this Commonwealth back on the right course,” Republican Del. Kathy Byron told the crowd at the Virginia March for Life.

Both the House and Senate have passed bills to undo restrictions on abortion access that were enacted when the legislature was under GOP control, including a 24-hour waiting period before an abortion and a requirement that women seeking an abortion undergo an ultrasound and counseling.

The bills, which Democratic Gov. Ralph Northam supports, would also roll back the requirement that an abortion be provided by a physician and undo strict building code requirements on facilities where abortions are performed. Each chamber must pass the other’s before they could be sent to Northam for his signature.

Abortion-rights advocates say the restrictions injected politics into a health care decision and made obtaining an abortion overly burdensome.

“Medical decisions should be between a woman and her health care providers. Medical professionals know the proper protocol for each individual patient, not politicians,” said House Democratic Majority Leader Charniele Herring, who is sponsoring that chamber’s bill.

Democrats have also defeated some Republican-sponsored bills this session that would have enacted abortion restrictions.

Abortion opponents say the existing restrictions protect pregnant women’s health and safety and are prudent, given the gravity of the decision to obtain an abortion.

Attendee Patty Raehn, from Colonial Beach, said the issue became critically important to her when she became pregnant at a young age and was encouraged to have an abortion. She said she went on to give birth to a son, now 27, whom she called her “saving grace.”

Raehn said she opposes the Democrats’ legislation and that abortion is her No. 1 issue when deciding how to vote.

“I will not look at other issues. If you don’t stand for life, I can’t vote for you,” she said.

Speakers at the rally included leaders of conservative and anti-abortion advocacy groups, including March for Life President Jeanne Mancini, and women who said they had obtained abortions they later regretted.

After the rally concluded, attendees marched through downtown streets. Some carried signs that said “unborn lives matter” and “abortion is murder.”

Capitol police spokesman Joe Macenka said around a thousand people marched to the event and 42 buses dropped off an unknown number of additional attendees. He said the department could not provide a more specific crowd estimate.

Mancini said in a statement that she thought the crowd size was above 2,500.