Former Virginia Gov. Gerald Baliles, a Democrat known as the "transportation governor" and for his work to clean up the Chesapeake Bay and to increase foreign trade, has died. He was 79.

RICHMOND, Va. (AP) — Former Virginia Gov. Gerald Baliles, a Democrat known as the “transportation governor” and for his work to clean up the Chesapeake Bay and increase foreign trade, died Tuesday. He was 79.

Gov. Ralph Northam issued a statement saying Baliles died Tuesday morning, surrounded by his family. He had been battling cancer.

“Governor Baliles fought for rural Virginians, promoted civil discourse, and was the epitome of a true public servant,” Northam said, adding that the state flags will fly at half-staff for the next 30 days in Baliles’ honor.

“It’s easy to say that democracy works better when practiced with civility, honest debate, and good-faith compromise. Jerry Baliles lived it,” Clinton and his wife, former Secretary of State Hillary Clinton, said in a statement Tuesday.

Baliles, who served from 1986 to 1990, pushed through a 10-year, $10 billion transportation initiative during the first year of his administration that required increases in the gas and sales taxes.

“He had the courage to take the political hit for raising taxes for improvements that future governors would cut the ribbons on,” Del. Vivian E. Watts, D-Arlington said during a 2002 retrospective examining Baliles’ administration. Watts was secretary of public safety and transportation under Baliles.

Baliles continued pushing for better transportation long after he left the Executive Mansion, calling for Virginia to install tolls on interstates to raise money for transportation projects.

He once accused his successors of squandering the progress made during his administration.

“The 1990s could well go down as Virginia’s Decade of Delusion,” he told the nonprofit Intelligent Society of Virginia. “We have convinced ourselves that somehow, someway, our commonwealth will take care of itself and that we can avoid the consequences of economic expansion.”

Baliles also committed Virginia to an ambitious cleanup of the Chesapeake Bay while in office and later continued his conservation efforts. His book “Preserving the Chesapeake Bay” was a call to arms to keep the bay cleanup going

“I hope it serves as a reminder to all readers that the bay is a resource that cannot be turned on and off like a faucet” but needs continual care, Baliles said “It is a natural treasure that should be preserved.”

Under Baliles’ leadership teacher salaries increased to within $400 of the national average. He also introduced the first statewide standardized testing, which was later supplanted by the Standards of Learning. To stress the importance of thinking globally, Baliles had oversized maps of the world installed in every seventh-grade classroom in Virginia.

He also fought to expand the state prison system and appointed the first woman to the Virginia Supreme Court.

But many remember Baliles as the politician with the unusually retentive memory that allowed him to walk into a crowded room and recall the names of everyone to whom he was introduced.

After leaving office, he emerged as one of the nation’s leading authorities on aviation, serving as chairman of a national commission appointed by President Clinton in 1993 to find ways to keep airlines profitable.

While in office, Baliles worked to get Virginia’s two largest airports, Washington National and Washington Dulles International, away from federal control and into the hands of the Metropolitan Washington Airports Authority.

He grew up on a farm in rural western Virginia. Baliles’ parents broke up when he was young and he and his brother, Larry, lived with their grandparents while his younger brother, Stuart, stayed nearby with an aunt and uncle.

Baliles became an avid reader and student of history.

“For me, books and airplanes were windows on the world,” he once said.

At 15, Baliles went to Fishburne Military Academy, where he graduated second in his class. He met his first wife, Jeannie McPherson, while at Wesleyan College in Connecticut. They had two children, Laura and Jonathan.

His cautious, deliberate style fueled his climb from state legislator to attorney general to governor without ever losing an election. Or it could have been his slogan: “Baliles. The name rhymes with smiles.”

“I’m not flamboyant,” he said after winning the governor’s seat. “But I don’t know many people who have been brash who have gotten far in politics.”

In 1989, during Baliles’ tenure, a violent coal strike in southwest Virginia had tensions so high he was advised to stay out of the area. Then the economy collapsed his last year in office, and he left his successor a $2 billion budget deficit.

He remained active in politics long after leaving the Capitol. After retiring as a partner at the Richmond law firm of Hunton & Williams, he returned to the University of Virginia in 2006, to direct the Miller Center of Public Affairs. 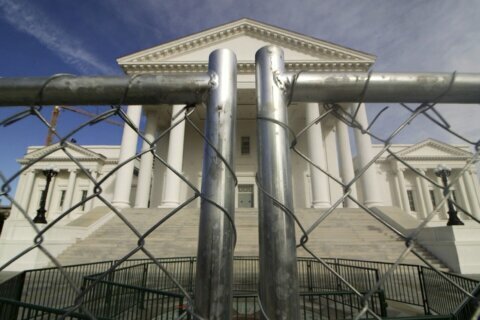