ERA activists are eyeing a win in Virginia. Is now the time?

Democrats hoping to seize control of the Virginia Legislature in the 2019 elections say passing the long-stalled Equal Rights Amendment will be a top priority next year.
(1/2) 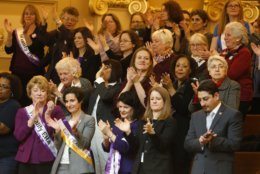 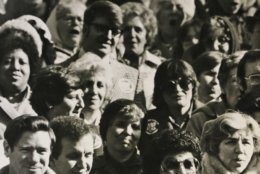 RICHMOND, Va. (AP) — As Carol Jenkins sees it, a nearly 100-year push to add the Equal Rights Amendment to the U.S. Constitution is closer to reality now than it’s ever been.

That’s why there’s a “tremendous effort” underway to elect supporters of the long-stalled gender equality measure in Virginia’s elections next month, says Jenkins, co-president and CEO of the nationwide ERA Coalition. Advocates hope if they can pick up a few seats from Republican opponents, the once solidly conservative Southern state that’s voted down the ERA time and again might instead be the critical 38th to approve it.

Virginia voters “have the future of girls and women in their hands,” Jenkins says.

Initially proposed in Congress in 1923 and passed in 1972, the Equal Rights Amendment would ban discrimination on the basis of sex, explicitly enshrining equality for women in the U.S. Constitution. Thirty-seven states have ratified it; supporters say having 38 would meet the constitutional threshold for approval.

There’s a hitch: A 1982 ratification deadline set by Congress and other thorny questions are bound to hold up the efforts in court, many legal experts say.

ERA opponents criticize the measure as unnecessary, in part because of the 14th Amendment, which guarantees all U.S. citizens “equal protection of the laws.” They say the long-passed deadline means the ERA amendment isn’t eligible for ratification now, something proponents say Congress could resolve.

Critics also point to the five states that ratified it in the 1970s, then later moved to rescind their support.

Still, women’s advocates are eyeing victory for a movement that has outlived many of its members. They say the amendment has a good chance of advancing in a state that has undergone seismic political shifts due to increasing diversity and the growing activism and political power of women.

Hornung’s group has an ice cream van touring college campuses around the state to educate students who weren’t yet born when the amendment was a hot topic. Volunteers from all 50 states have participated in the group’s get-out-the-vote postcard campaign, according to Hornung.

National groups have pitched in with fundraisers and outreach, Jenkins says. Many Democratic candidates — men and women — have made the ERA part of their campaigning. Celebrities have joined the cause.

“Women don’t have equal rights in the US Constitution? That’s insane!” Actress Julia Louis-Dreyfus tweeted earlier this month, along with an appeal to donate to a slate of 10 women candidates.

At the state level, some Republicans are pushing back.

Holcomb, who used to work for the conservative interest group Eagle Forum, founded by the late ERA opponent Phyllis Schlafly, says the ERA is an ineffective tool to tackle the issues of sexual violence and the exploitation of women that have surfaced during the #MeToo movement.

Opponents also say the ERA could erode commonsense protections for women and girls — such as the Women, Infants and Children nutrition assistance program or workplace accommodations during pregnancies — limit abortion restrictions and force homeless shelters, bathrooms and other public places to be opened to both sexes. They also cite the cost of anticipated legal battles: The issue is widely expected to end up at the U.S. Supreme Court.

Advocates say passing the ERA, written by suffragist Alice Paul, would offer the strongest possible protection for women against discrimination.

“Unless it’s guaranteed in the Constitution, it’s not a guarantee,” said Lulu Meese, a women’s rights activist in her late 80s who was a leader in the fight for the ERA in Virginia during the 1970s and 1980s.

Pushing the amendment then was an uphill battle in Virginia, a state that refused to ratify the 19th Amendment giving women the right to vote until more than 30 years after it became federal law. State lawmakers — the vast majority men — defeated ERA ratification measures 10 years consecutively, in what a Washington Post story from 1982 called “a political ritual in Richmond.”

“Most of the General Assembly members were men, and they were misogynists,” said Pat Fishback, a retired science educator and longtime ERA advocate in her 70s who was active during the fight in the 1970s and ’80s. “They simply did not believe that women should have equal rights.”

Virginia has become much more progressive over the past decade; Democrats have made big gains. In 2018, they flipped three congressional seats. The year before, they picked up 15 state House seats, including 11 won by women. It wasn’t enough to push the ERA through.

Advocates mounted an aggressive lobbying and advocacy campaign in January, at the start of this year’s legislative session, often packing Capitol hallways to greet lawmakers on their way to House or Senate chambers. But as in previous years, the pro-ERA legislation stalled in the GOP-led House after passing the Republican-controlled Senate with bipartisan support. Delegates in the House deadlocked 50-50 on a bid to force a full floor vote, with the tie vote meaning the effort failed.

Every seat in both chambers is on the ballot Nov. 5, with Republicans defending their razor-thin majorities.

“If we flip the House of Delegates, it will probably be ratified in the first week we’re back,” said state Sen. Scott Surovell, a northern Virginia Democrat who has been sponsoring ERA-ratification measures for years.

For advocates, after the nearly 100-year fight, that would be cause for massive celebration.

“I say let’s just do this,” said Jenkins. “We can continue to argue. We will. But let’s just make discrimination illegal.”