Del. Ibraheem Samirah, a 27-year-old Democrat, held up three laminated protest signs at Trump's appearance in Jamestown that said: "Deport Hate," ''Reunite My Family" and "Go Back to Your Corrupted Home."
(1/3) JAMESTOWN, Va. (AP) — A heckler who interrupted a speech by President Donald Trump during Tuesday’s commemoration of 400 years of American democracy is a new Muslim lawmaker from Virginia angered by the president’s race-related rhetoric.

Del. Ibraheem Samirah, a 27-year-old Democrat, held up three laminated protest signs at Trump’s appearance in Jamestown that said: “Deport Hate,” ”Reunite My Family” and “Go Back to Your Corrupted Home.”

Samirah’s brief protest came amid Democratic criticism of Trump’s policy of detaining migrants at the U.S.-Mexico border and the continuing backlash over remarks Trump tweeted suggesting four minority Congresswomen should “go back” to the “totally broken and crime infested places from which they came.”

Trump also has come under fire for his recent disparaging remarks about the majority-black, Baltimore-area district of U.S. Rep. Elijah Cummings as a “disgusting, rat and rodent infested mess.”

After Samirah stood and held up his signs, he was led out of a tent where Trump was speaking at a museum near the site of the original Jamestown colony. Some in the audience chanted: “Trump,” ”Trump,” ”Trump.”

Samirah told The Associated Press afterward that he was protesting Trump’s policies and rhetoric.

A Palestinian American dentist who lives in the Washington suburb of Herndon, Samirah won a special election in February to represent a northern Virginia district.

“I am confident that my constituents — my friends and neighbors in Herndon and across Virginia — would rather see me stand up and be heard than sit down, be polite, and passively accept the presence of a man who has sowed fear, division, and hate from the highest office in the land,” Samirah said in a statement.

The Washington Post reported that in one post after the death of Ariel Sharon, Samirah wrote that the former Israeli prime minister should “burn a million times for every innocent soul you killed.” He also wrote that he wished the same for “our beloved Arab ‘leaders’ (butchers I should say).”

Three months after his election, Samirah said he was harassed by protesters at his first town hall meeting. Samirah said a small group of protesters made comments attacking his faith and carried signs denouncing Sharia law, which is Islamic law derived from the Quran and the traditions of Islam.

As he departed the White House, Trump said the black Virginia legislators who announced a boycott of the Jamestown event were going “against their own people.” The Republican president claimed African Americans “love the job” he’s doing and are “happy as hell” with his recent comments about Cummings and his majority-black Baltimore-area district.

On Tuesday, boycotting lawmakers critical of Trump held an emotional ceremony of their own at a site of a notorious former slave jail in Richmond.

Del. Delores McQuinn refused to use Trump’s name and instead called him “the tenant in the White House.” McQuinn paused several times and choked back tears as she spoke about Trump’s remarks about the four minority Congresswomen.

“He wasn’t just talking about those four women of color, so I don’t want any of us to be confused … he was speaking to every person of color in the United States,” McQuinn said. 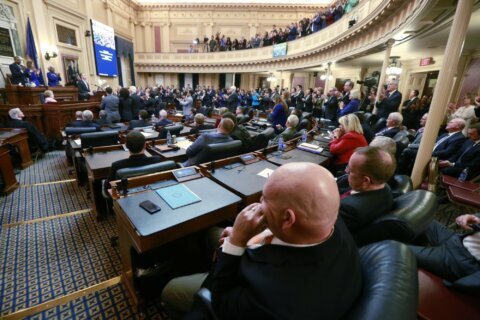 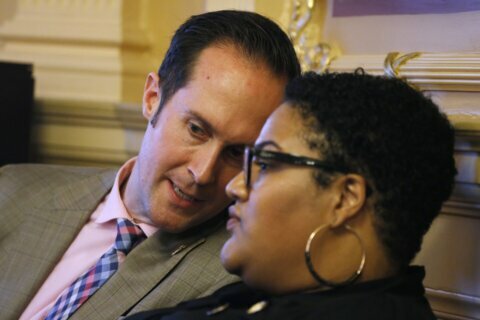 Virginia in the spotlight as decision on redistricting looms