RICHMOND, Va. (AP) — The Virginia Parole Board and its former chairwoman violated state law and its own policies and procedures in the case of a man convicted decades ago of killing a Richmond police officer, the state’s government watchdog agency said in a report initially withheld from the public.

Republican legislative leaders on Thursday released the six-page report from the Office of the State Inspector General about the agency’s investigation into the release of Vincent Martin. That came a week after the inspector general’s office provided the media with an almost entirely redacted version of the report, making clear at least some allegations against the parole board had been “substantiated.”

The report said the inspector general’s office found the board did not initially notify the Richmond commonwealth’s attorney of Martin’s release within the required time frame. It said the board also did not “endeavor diligently” as required by law to contact the slain officer’s family — who ultimately did have a chance to provide input. And it said the board declined to hear from two people with concerns about releasing Martin.

One of the sisters of slain Officer Michael Connors called the report’s findings “horrific” and “devastating.”

“The degree to which the law was violated is shocking,” House Minority Leader Todd Gilbert said.

GOP leaders said all current Parole Board members should resign, or be fired by Gov. Ralph Northam if they refuse. Republicans also want Martin’s parole immediately repealed and Martin returned to prison to await a new board’s decision on whether he should be set free.

Alena Yarmosky, Northam’s spokeswoman, said the review was procedural and had nothing to do with the merits of the decision to release Martin, who served a 40-year sentence.

“Governor Northam has spoken with the new Chair of the Parole Board, and reiterated that he expects all notification procedures to be followed, period,” Yarmosky’s statement said.

Parole Board Chair Tonya Chapman, who was not part of the decision to free Martin, provided a lengthy point-by-point response that said the report’s findings were “based on faulty assumptions, incorrect facts, a misunderstanding of certain procedures, and incorrect interpretations of the Virginia State Code.” Her response noted Connors’ family was able to give input about parole for Martin, which was considered in the board’s decision.

But according to the report, the board’s former chair, Adrianne Bennett, was “reluctant” to contact the Connors family at all.

“The Parole Report prepared by the Victim Services Coordinator noted that Bennett stated she ‘had been working on this case for four years and the family’s input was the last piece of the puzzle and the Board was reluctant to reach out, but is required by law,’” the report said.

Several Parole Board employees told the inspector general’s office that state law and board policies and procedures regarding victim notification “were not always followed under Bennett’s tenure as Chair,” the report said.

“The employees stated that Bennett was vocal about not wanting to contact victims and particularly not in the (Martin) case due to the expectation of opposition because the victim was a police officer,” it said.

Bennett and a victim services coordinator met with the family via a conference call March 26 after “neither Bennett nor any other representative” from the board showed up for a call scheduled earlier in the month, the report said.

Bennett, now a judge in Virginia Beach, did not respond to a request for comment.

She released a statement in April defending Martin’s release and saying Martin had “demonstrated himself over the decades to be a trusted leader, peacemaker, mediator and mentor in the correctional community.”

The report found that despite the fact that Martin, who was referred to in the report by his initials, first became eligible for parole in 1994 and received annual parole reviews, Connors’ family was never contacted for input before this year.

The board also declined to hear from a co-defendant of Martin’s who had “concerns” with his release, as well as an “alleged prior shooting victim” of Martin’s, according to the report.

On that issue, Chapman said the inspector general’s office had confused what the board “may do” and what it “must do.”

The redactions in the initial report angered Republican lawmakers and law enforcement advocacy groups who called for all the findings to be made public. Northam’s administration declined requests from The Associated Press for a full copy of the report.

“On the one hand, I’d probably say that we are pleased that this has finally come to light. But at the same time, its devastating. … The things she did, the things this parole board did to us, and there’s no recourse,” Maureen Clements, one of Connors’ sisters, said in an interview.

Beyond the Martin case, the board has recently drawn criticism from prosecutors, other victims’ families and members of law enforcement for both the types of offenders who were granted parole and allegations that proper notification was not provided according to the law.

The release of Martin, who has previously declined a request to speak with AP, drew particular condemnation from law enforcement groups.

Connors was fatally shot in November 1979 after pulling over a robbery getaway car. 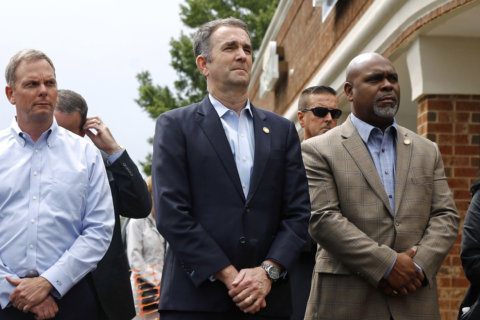 Survivor who crossed path with gunman thought it was a drill