Lawmakers finished the session Sunday after passing a state budget that includes pay raises for teachers and state employees and significant new spending on public education.
(1/6) Fairfax strongly defended himself and lashed out at his critics from his rostrum in the state Senate as the 2019 legislative session was coming to a close.

“I’ve heard much about anti-lynching on the floor of this very Senate, where people were not given any due process whatsoever, and we rue that,” Fairfax said, referencing legislation the General Assembly passed expressing “profound regret” for lynchings in Virginia between 1877 and 1950.

“And we talk about hundreds, at least 100 terror lynchings that have happened in the Commonwealth of Virginia under those very same auspices. And yet we stand here in a rush to judgment with nothing but accusations and no facts and we decide that we are willing to do the same thing,” Fairfax said.

When he finished his five-minute impromptu speech, stunned senators sat in awkward silence.

Fairfax, who is black, has been accused by two women of sexual assault. Both of the alleged victims are African American.

Earlier this month, Vanessa Tyson publicly accused Fairfax of forcing her to perform oral sex in his hotel room during the Democratic National Convention in Boston in 2004. Her lawyer said last week that Tyson plans to meet with prosecutors in Massachusetts to detail her allegations.

Meredith Watson has also publicly accused Fairfax of sexual assault. She issued a statement accusing him of raping her 19 years ago while they were students at Duke University.

The Associated Press generally does not name people who say they are victims of sexual assault, but both women have come forward voluntarily.

House Republicans announced plans Friday to hold a public hearing where Fairfax, Tyson and Watson can testify, a move that Fairfax and some Democrats have panned as a political ploy.

Fairfax has indicated he won’t participate in the hearing, leaving it an open question whether Republicans will try to compel him to testify. Fairfax has said the accusations should be investigated by law enforcement.

“That is the worst, most disgusting type of rhetoric he could have invoked,” Gilbert said. “It’s entirely appropriate for him to talk about due process and we would intend to offer him every ounce of it, and he’s welcome to take advantage of that anytime he would like.”

But black lawmakers did not object to Fairfax’s speech.

“He said what he needed to say,” said Sen. Mamie Locke.

Virginia Legislative Black Caucus Chairman Del. Lamont Bagby said he’s heard similar rhetoric from his constituents, who have expressed concerns that Fairfax is being treated unfairly because of his race.

Gov. Ralph Northam and Attorney General Mark Herring, both Democrats and both white, are embroiled in their own scandal after acknowledging they wore blackface in the 1980s. Northam has also resisted widespread calls to resign and instead said he intends to devote his remaining years in office to addressing the state’s deep and lingering racial divisions.

The trio of scandals has rocked Virginia politics and exposed deep divides among Democrats.

State Democrats have expressed fear that the uproar over the governor could jeopardize their chances of taking control of the GOP-dominated Virginia legislature this year. The party made big gains in 2017, in part because of a backlash against President Donald Trump, and has moved to within striking distance of a majority in both houses.

At the same time, the Democrats nationally have taken a hard line against misconduct in their ranks because women and minorities are a vital part of their base and they want to be able to criticize Trump’s behavior without looking hypocritical. 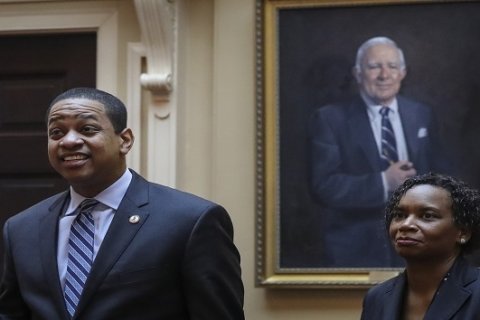