Holidays: Where to see holiday lights | Santa's back with inflation, inclusion on his mind | 4 ways to limit your holiday debt | Inflation 'definitely a guest' at holiday celebrations this year
Home » Virginia News » Woman says snake bit…

"My left foot felt a bee sting, a hornet sting — something similar," Myrick told WTOP. "So, I reached down to brush my foot off to keep walking ... That's when I felt what turned out to be a snake wiggling in my fingers."
Listen now to WTOP News WTOP.com | Alexa | Google Home | WTOP App | 103.5 FM
(1/6) 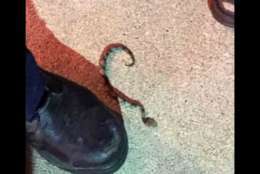 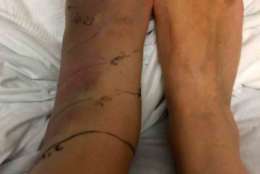 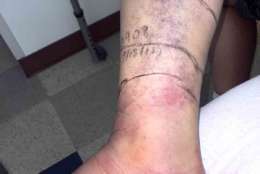 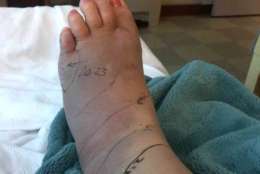 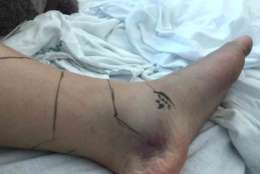 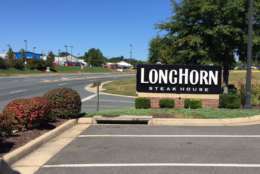 MASSAPONAX, Va. — A Fredericksburg woman is recovering after being bitten by a copperhead snake while at a Spotsylvania County restaurant.

Rachel Myrick’s boyfriend’s brother had returned from Afghanistan so they — along with other family members and friends — decided to have a welcome-home dinner on Sept. 12 at the LongHorn Steakhouse in the Southpoint II development in Spotsylvania County.

They walked through the first set of front doors to get into the restaurant and were about to go through the second when Myrick felt a sharp sting in her foot.

“My left foot felt a bee sting, a hornet sting — something similar,” Myrick told WTOP. “So, I reached down to brush my foot off to keep walking.”

She put her foot down and that’s when she was bit the second time.

“It was significantly more painful than the first time,” Myrick stated.

She then dropped everything and then clutched her foot screaming in pain.

“As I do that and had my fingers wrapped around the bottom of my foot, that’s when I felt what turned out to be a snake wiggling in my fingers,” she continued.

The snake held on to her foot until Myrick was able to shake it off.

“It hit the floor between my son, Dylan, and my boyfriend, Mike. Both of them instantaneously stepped on it, stepped on its head and killed it right in that foyer area,” recalled Myrick.

They called 911, and local first responders and animal control arrived.

Myrick was sent to Mary Washington Hospital where she stayed until this past Sunday. She was given anti-venom because of the swelling.

The bite and treatment have severely limited her mobility for the moment, and she said she is still in a considerable amount of pain.

Myrick said that even with mobility tools like wheelchairs or crutches, she is exhausted after about an hour of moving. She noted that her foot can swell to double its normal size when she moves around because of the bite and anti-venom.

She said that she is a real estate agent with two active children, which makes this entire situation more of a hardship for her.

As for the restaurant, Myrick said she got a phone call from LongHorn Steakhouse’s regional manager, though they have been playing telephone tag the past couple days and have not been able to connect. Otherwise, Myrick said she has not heard anything from the store itself, but does note the company has been genuine so far in the process.

At this point, Myrick said all she can do is stay off her foot and recover from the bite.

“I’m unable to do anything normal in my day-to-day life,” said Myrick. “My entire life is upside down at this point.”