HUNTINGTON, W.Va. (AP) — The revenge of the cows heated up Thursday with yet another instance of a herd getting…
Listen now to WTOP News WTOP.com | Alexa | Google Home | WTOP App | 103.5 FM

HUNTINGTON, W.Va. (AP) — The revenge of the cows heated up Thursday with yet another instance of a herd getting loose in a U.S. community.

This time a cattle-hauling truck rolled over along Interstate 64 in West Virginia, and an emergency dispatcher in Cabell County said a bridge connecting Huntington to Lawrence County, Ohio, also had to be shut down temporarily.

The dispatcher, who cited policy in declining to give his name, said authorities were trying to determine how many cattle were on the truck. However, they took off in several directions, including onto the nearby bridge.

The dispatcher said police in Ohio told him that “they’re running up and down the highway there, too.”

Firefighters were dispatched to assist the westbound truck, which ended up in the highway’s median. The driver was trapped for nearly two hours before being removed from the truck with minor injuries, Huntington Fire Chief Jan Rader told The Herald-Dispatch. The accident forced the interstate to be shut down in both directions for several hours.

Huntington is home to Marshall University, whose nickname happens to be the Thundering Herd.

It marked at least the third time that week that cows have gotten loose and prompted responses in U.S. cities, including the second time this week in West Virginia.

On Wednesday, 40 cows escaped a California slaughterhouse and ended up in a Los Angeles suburb where one was killed after charging a family.

Three loose cows roamed the streets of Bluefield, West Virginia, on Monday. Trains had to be stopped as authorities tried to coax the animals off of railroad tracks. 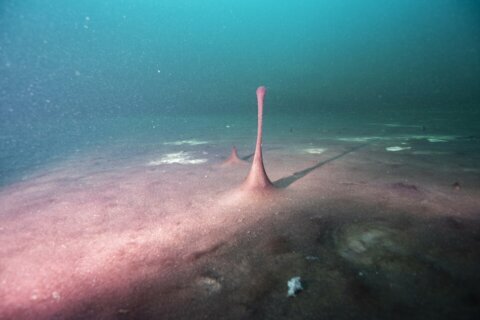