SARDIS CITY, Ala. (AP) — A 200-pound tortoise named Sparkplug that escaped from a pen in Alabama is back home after a journey across two counties and at least one soybean field.

Sparkplug, a 60-year-old African spurred tortoise that lived in an enclosure in Etowah County, pushed its way out of the fenced pen on Thursday. A motorist who spotted the animal on the side of the road took it to his 200-acre (81-hectare) spread in Marshall County, owner Ty Harris told The Gadsden Times in a story Monday.

Harris found out what had happened after using social media to spread the word about Sparkplug, but there was still the matter of finding the tortoise on the land where he’d been released.

A big, roaming tortoise leaves tracks, and area farmers were able to see where Sparkplug had plowed through soybean fields. The man who initially released Sparkplug into the wild found the tortoise and returned it to Harris on Saturday.

“He just had a couple of days out on the town,” said Harris.

Harris used to operate a wildlife sanctuary in the area and got Sparkplug from a family in New Jersey that couldn’t keep the animal. 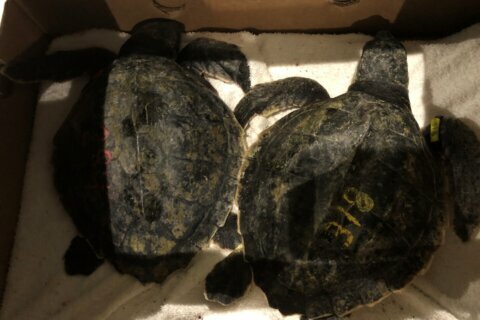