WARWICK, R.I. (AP) — There goes Rhode Island again — always finding a way to get its tiny tentacles onto the national stage.

In a made-for-memes moment sandwiched between other states’ calls to fight poverty and end racial injustice, a lawmaker and a restaurateur with a heaping plate of sauteed squid stood on a beach and proclaimed Rhode Island the “calamari comeback state” at the virtual Democratic National Convention.

Americans, including some Rhode Islanders, didn’t seem to know quite what to make of the calamari cameo.

“My new home state of Rhode Island is trending over calamari and I have never been more hungry and confused at the same time,” tweeted Andrew Wortman, a volunteer firefighter and political activist.

The backstory: Joseph McNamara, who chairs the state Democratic Party and appeared in the video, lobbied successfully in 2014 to make calamari Rhode Island’s official state appetizer.

“Rhode Island, the Ocean State, where our restaurant and fishing industry have been decimated by this pandemic, are lucky to have a governor, Gina Raimondo, whose program lets our fishermen sell their catches directly to the public and our state appetizer, calamari, is available in all 50 states,” McNamara said in the DNC spot, adding: “The calamari comeback state of Rhode Island casts one vote for Bernie Sanders and 34 votes for the next president, Joe Biden.”

McNamara’s “calamari comeback” comment touched off a flurry of social media posts, but the real star was the chef who stood silently next to him — John Bordieri, executive chef at Iggy’s Boardwalk, a seafood restaurant on Narragansett Bay.

Masked and clad entirely in black, Bordieri held a huge plate of lightly battered squid — an image that for many epitomized the littlest state’s outsized personality.

“Rhode Island casts 25 pieces of calamari served by a ninja to Bernie Sanders, and 32 pieces for the next president of the U.S., Joe Biden,” Adam Gaffney, a Harvard Medical School physician and public health researcher, wrote on Twitter.

“Leave the gun. Take the calamari,” quipped Mike Stanton, author of “The Prince of Providence,” a book about Vincent “Buddy” Cianci, whose crimes while mayor put Rhode Island’s capital city on the map, often for all the wrong reasons.

Rhode Island has been a punch line since the Cianci era. In 2016, it was widely ridiculed after a $5 million state tourism campaign was found to have included a video featuring a scene from Iceland — an embarrassment that earned it the nickname “Rhode Iceland.”

This time, though, its leaders are unapologetic — if only because their beloved appetizer is so mouth-watering. 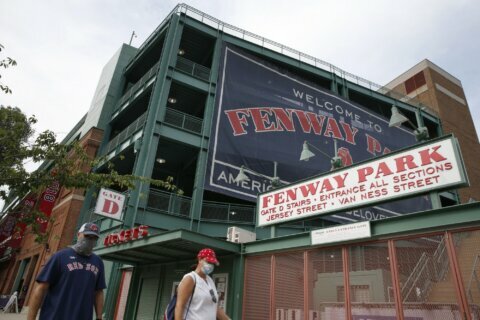