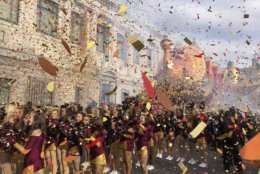 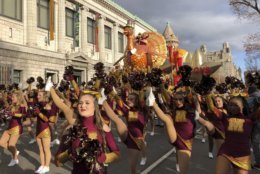 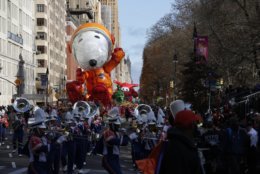 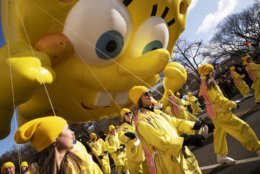 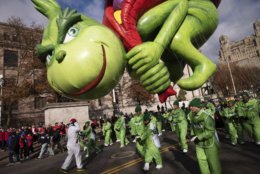 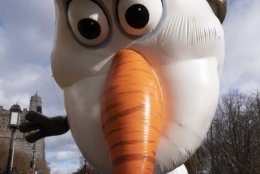 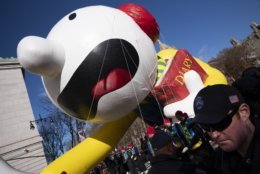 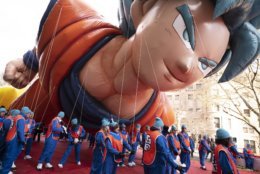 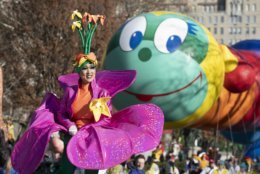 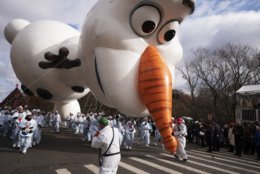 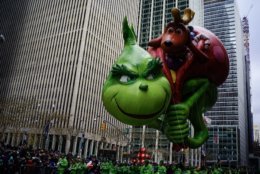 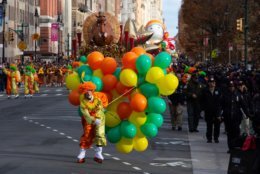 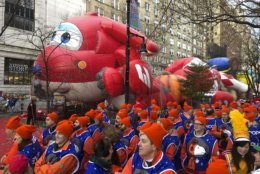 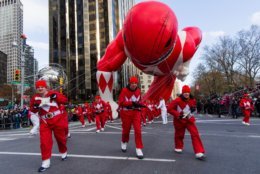 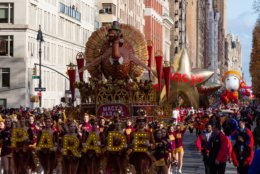 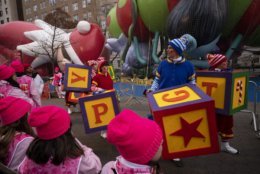 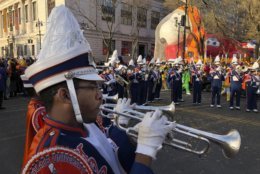 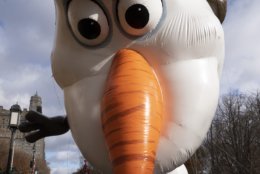 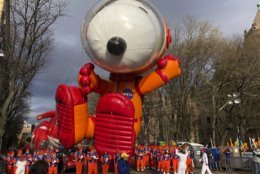 NEW YORK (AP) — The beloved balloons flew, but lower than usual, in a windy Macy’s Thanksgiving Day Parade after an anxious weather watch.

Wind had threatened to ground the giant inflated characters. But officials announced less than an hour before Thursday’s start time that the balloons could fly, if in a down-to-Earth way.

As the parade continued — even while city emergency officials sent out a public alert about wind gusts — handlers struggled with some giant balloons and pulled them close to the ground. Meanwhile, winds did keep giant balloons out of Philadelphia’s Thanksgiving Day parade.

The Macy’s parade balloons might have been lowered, but Susan Koteen’s spirits weren’t. She has traveled from Florida, three years in a row, to see the parade.

“We love it. Because it’s exciting, it’s patriotic, and it just — it warms your heart,” she said.

Spectators lined up a half-dozen deep along the route on a gusty fall day, with leaves and confetti swirling in the wind.

A “Green Eggs and Ham” balloon joined the lineup, Smokey Bear returned for the first time since 1993, and spectators got to see new versions of favorites Snoopy and SpongeBob SquarePants.

A smaller new balloon, Japanese artist Yayoi Kusama’s “Love Flies Up to the Sky,” and two star-shaped balloons ultimately didn’t make the lineup because of tears and stress from inflation before the parade, Macy’s said. A giant Ronald McDonald balloon also tore before the parade and was pulled out midway through, the company said. The McDonald’s character had a visibly deflated leg.

During the middle of the parade, the wind was 13 mph (21 kph) with gusts up to 32 mph (51 kph), according to the National Weather Service.

City rules require balloons to be grounded if sustained winds exceed 23 mph (37 kph) and gusts exceed 34 mph (55 kph). The balloons have been grounded only once for weather-related reasons, in 1971.

On Thursday, in a windy spot near the start of the 2.5-mile (4-kilometer) route, a Nutcracker balloon knocked into a handler, who fell down but then continued along. A Grinch balloon touched some trees as it passed a corner, drawing an “ooh!” from the crowd.

To parade-goer Kate O’Connor, the wind was “scary, especially around the corners — they’re like wind tunnels.”

It was still cool to see the balloons up close, “but they’re really meant to be seen from underneath,” said the resident of Newtown, Connecticut, who comes to the parade every other year with her daughter, Megan, 8.

Joanna Mammen and her family came from Bradford County in northern Pennsylvania to revisit the parade she attended every year while growing up in the Bronx.

“My favorite float, as a kid, was Santa Claus,” said Mammen, 69. “Most of the other floats from that time, the kids these days wouldn’t even recognize. But it’s a beautiful tradition, to come out and experience the crowd.”

It was a first-time experience for her husband, Bill. And for him, it was all about sharing the fun with the couple’s son, Jason, and 2-year-old grandson, Lincoln.

“This was really a bucket list item for me, Macy’s Day Parade in New York City,” the 23-year-old said. “You grow up seeing glimpses on TV, but it’s something I knew I needed to experience.”

The parade, one of the city’s most popular events, features about 8,000 marchers, two dozen floats, entertainers and marching bands, ending with an appearance from Santa Claus.

The rules requiring them to be grounded in high winds came after a “Cat in the Hat” balloon blew into a lamppost near Central Park in 1997, critically injuring a woman.

In 2005, an M&M’s balloon smacked into a lamppost in Times Square, causing cuts and bruises to a woman in a wheelchair and her 11-year-old sister.

In 2017, a gust on an otherwise calm day sent a smaller balloon into a tree branch. That one popped and fell harmlessly onto the crowd. 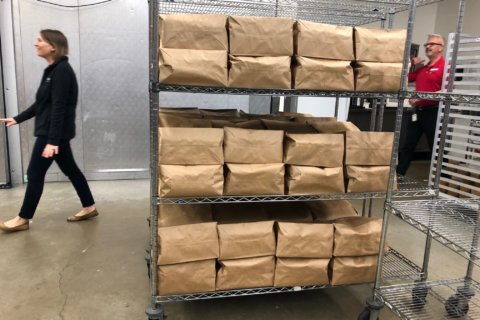