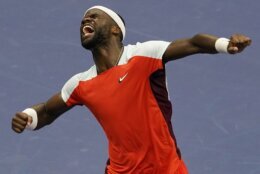 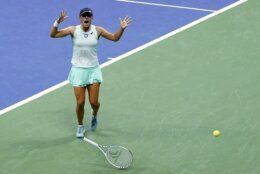 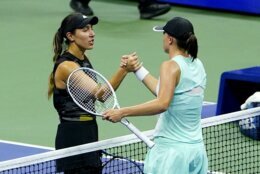 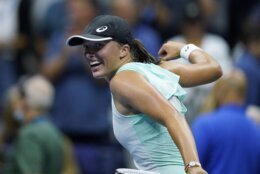 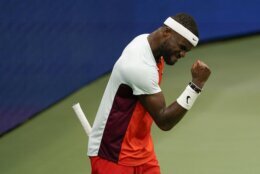 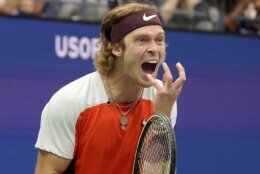 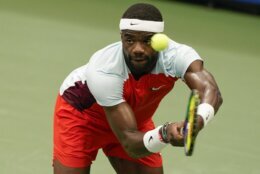 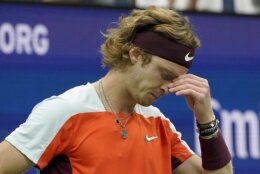 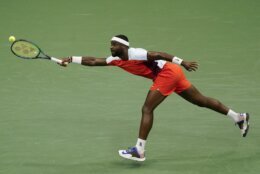 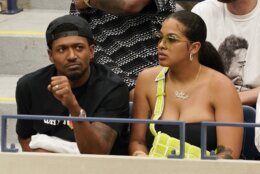 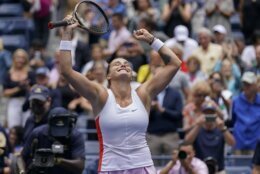 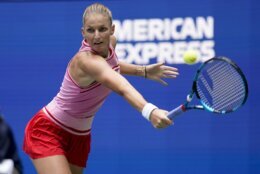 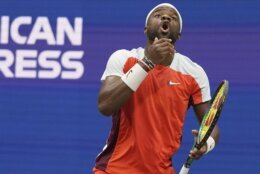 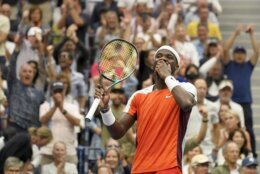 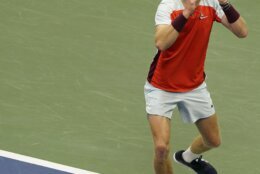 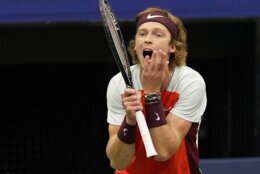 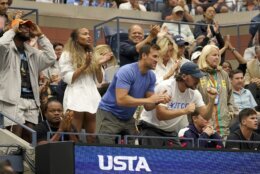 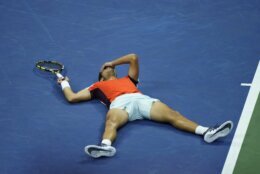 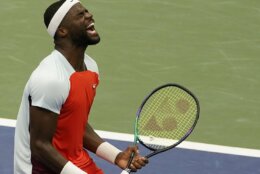 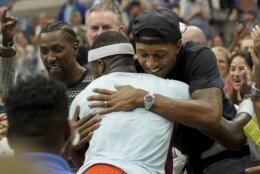 NEW YORK (AP) — About 20 minutes after Frances Tiafoe earned the first trip to the U.S. Open semifinals by an American man since 2006, he met up in an Arthur Ashe Stadium foyer with a host of friends, Washington Wizards All-Star guard Bradley Beal among them.

Everyone traded hearty hugs and huge smiles. Tiafoe shouted, “Let’s pose for a dope photo!” and they obliged. As the nine-person line stood together, someone yelled, “Throw up a ‘Dub!’” so Tiafoe and others formed a “W” — as in “Win” — by joining thumbs and index fingers on both hands. Tiafoe’s girlfriend ran through the nearby double doors, jumped into his arms, gave him a kiss, then wiped away lipstick from his mouth.

Most assuredly a showman, and someone striving for years for this sort of success on big stages, Tiafoe sure is enjoying the ride, as are his pals, his parents and the partisan fans, who last celebrated a Grand Slam trophy for a man from the United States two decades ago.

Tiafoe managed the tricky task of following up the biggest win of his career, against 22-time Grand Slam champion Rafael Nadal in the fourth round, with another milestone victory, beating No. 9 seed Andrey Rublev 7-6 (3), 7-6 (0), 6-4 behind the backing of a boisterous crowd on Wednesday.

“I love to show the world what I can do,” said the 24-year-old Tiafoe, who is seeded 22nd at Flushing Meadows. “I just want to go out there and try to give the crowd what they want — and that’s me getting the win.”

Andy Roddick, who was in the Ashe stands Wednesday, was the last U.S. man to get to the semifinals in New York, losing to Roger Federer in the title match 16 years ago. Roddick also was the last man from the country to win any Grand Slam singles championship, taking the 2003 U.S. Open.

None of the men left in the bracket this time has ever won a major trophy. Tiafoe’s first career Slam semifinal will come Friday against another first-timer, No. 3 Carlos Alcaraz, who saved a match point and came through to edge No. 11 Jannik Sinner 6-3, 6-7 (7), 6-7 (0), 7-5, 6-3 at 2:50 a.m. on Thursday, the latest finish in tournament history. They played for 5 hours, 15 minutes, and it was terrific tennis.

“I always say you have to believe in yourself all the time,” Alcaraz said. “Hope is the last thing that you lose.”

Tiafoe’s step forward has come with the help of his coach, former pro player Wayne Ferreira, who said the player used to not be “really professional enough,” and pointed to important changes to his habits when it comes to eating — there had been too much chocolate and cookies and not enough breakfasts — practice and work in the gym.

“It’s taken time for us to get gradually to where we are today,” Ferreira said. “I kind of imagined he would be at his best by the end of next year.”

Tiafoe played aggressive, offensive tennis on Wednesday, never got broken and used 18 aces along with strong volleying to oust Rublev, a Russian who dropped to 0-6 in major quarterfinals. Tiafoe won 31 of 41 points when he went to the net; Rublev only ventured forward 11 times.

In the women’s quarterfinals Wednesday, No. 1 Iga Swiatek won her eighth consecutive match against an opponent ranked in the top 10, all in straight sets, by defeating No. 8 Jessica Pegula of the United States 6-3, 7-6 (4) at night. Swiatek next meets No. 6 Aryna Sabalenka, who collected a 6-1, 7-6 (4) victory over Karolina Pliskova.

Swiatek is a two-time champion on clay at the French Open but never had been past the fourth round on New York’s hard courts until this year’s run to the semifinals.

“I wasn’t expecting that at the beginning of the tournament,” Swiatek said.

The other women’s semifinal Thursday will be No. 5 Ons Jabeur vs. No. 17 Caroline Garcia, who beat 18-year-old American Coco Gauff on Tuesday.

Rain drops began falling just before the start of Tiafoe vs. Rublev, so they stood around waiting for the retractable roof to be shut. That resulted in a cool, wind-free environment and a louder setting, with applause and yells from fans reverberating in what became an indoor arena — circumstances that favored Tiafoe.

The only break of serve came more than two hours in, when Tiafoe went ahead 4-3 in the third set, then stood mostly motionless on court, enjoying the crescendo of support. The other key moments came at the conclusions of the first two sets; Tiafoe is 6-0 in tiebreakers at this U.S. Open.

Rublev actually had the first chance to nose ahead, with a set point at 6-5 in the first, but Tiafoe erased it with a risky forehand to a corner that drew a netted reply.

Several minutes later, it was Tiafoe who took the set, sealing it with a 130 mph ace, then strutting to the changeover, nodding and motioning with his racket for more noise.

A similar scene played out in the second tiebreaker after a drop volley by Tiafoe forced a mistake by Rublev to make it 6-0.

When Tiafoe produced a backhand return winner to seal a two-set lead, he sprinted to the sideline, sat down near his messy collection of towels, shirts and socks spread out around the ground — call it “college dorm room chic” or, to use his word, “diabolical” — and shook his fist amid the delirium of a standing ovation.

“Best tiebreaker I will ever play,” Tiafoe said. “Honestly a laughable tiebreaker. You can’t make that up.”

Rublev never tried to hide his anger at the way things were going. He hit himself in the leg with his racket or punched his strings. Over and over, he gesticulated and yelled toward his guest box, where only four of the 15 seats were occupied, quite a contrast to Tiafoe’s completely full section.

Ferreira was there. So was Tiafoe’s agent, Jill Smoller, whose clients include Serena Williams. Tiafoe’s twin brother, Franklin, too, and their parents, who emigrated to the U.S. from Sierra Leone in the 1990s during a civil war there. They lived in Maryland, where Dad helped build a junior tennis center then worked as a maintenance man there, leading Frances and Franklin to pick up a racket.

“Yeah, it’s a great story. Hopefully there will be a movie about it one day,” Ferreira said. “But he has to win the Grand Slam first. You only get movies if you do well.”

Picking up on that theme, the guy known to everyone in the sport as “Big Foe” said: “Everyone loves a Cinderella story. Just trying to make one.”