There’s more to New York than just the U.S. Open.

Meeting celebrities, for one. Going to a Broadway show, for another.

Iga Swiatek is doing it all.

The women’s singles champion said her tournament was made well before she lifted the trophy Saturday. She got to meet singer Seal earlier in the event.

“I was like, ‘Even if I’m going to lose right now, I already won this tournament, because I got a photo with him,’” Swiatek said.

The 21-year-old from Poland also met retired skier Lindsey Vonn. On Sunday, she plans to see a show, though she declined to reveal which one.

“I’m not going to say the name of the musical,” Swiatek said, “because I want to have a little peace tomorrow.”

The top-ranked Swiatek added this title to her two French Open victories, including one earlier this year. She has won seven titles in 2022, the most by a woman since Serena Williams in 2014.

Jabeur rallied after poor starts in both sets, but fell short in a Grand Slam final for the second straight time.

Iga Swiatek has kept up her dominant play in finals by taking the first set 6-2 against Ons Jabeur in the U.S. Open.

The top-ranked Swiatek has won her last nine finals, all in straight sets, since dropping the first one of her career in 2019.

One of those was against Jabeur this year in Rome, a 6-2, 6-2 rout, and so far this one has been just as easy.

The fifth-seeded Jabeur had lost only one set in the tournament while reaching her second straight Grand Slam final.

Iga Swiatek and Ons Jabeur have started the women’s singles final at the U.S. Open.

There is plenty of support for both on the grounds in New York. A number of fans are wearing the red of Poland, the home country of the top-ranked Swiatek.

Jabeur is trying to become the first African woman and first Arab in the professional era to win a Grand Slam title. The No. 5 seed from Tunisia lost in the Wimbledon final.

Alexandra Eala has become the first player from the Philippines to win a junior Grand Slam singles title.

The 17-year-old from Quezon City says she hopes her victory will inspire younger players from her country.

U.S. Open semifinalist Frances Tiafoe has pulled out of the United States team that will play group stage matches in the Davis Cup next week in Glasgow, Scotland.

The U.S. Tennis Association announced Tiafoe’s withdrawal. Tiafoe is a 24-year-old from Maryland who was seeded 22nd at Flushing Meadows.

He became the first American man to get to the U.S. Open semifinals since Andy Roddick was the tournament’s runner-up in 2006.

Tiafoe’s run ended with a loss to No. 3 seed Carlos Alcaraz. Alcaraz will meet No. 7 seed Casper Ruud in Sunday’s U.S. Open final.

Australians Storm Sanders and John Peers won the U.S. Open mixed doubles title with a 4-6, 6-4, 10-7 victory over the team of Kirsten Flipkens and Edouard Roger-Vasselin.

It was the first Grand Slam mixed doubles title for Peers, who had made 31 previous appearances before teaming up for the first time in this tournament with Sanders. He closed out the match tiebreak with an ace.

Peers had partnered with former women’s No. 1 Ash Barty last year in the Olympics, where they won a bronze medal.

Top-ranked Iga Swiatek and Ons Jabeur will play for the women’s singles title at the U.S. Open, where the mixed doubles champion also will be decided.

Swiatek is bidding for her second Grand Slam title this year and third overall. The 21-year-old from Poland won her second French Open in June, one of her six titles in 2022.

Jabeur is bidding for her first major title, having lost in the Wimbledon final. The No. 5 seed from Tunisia would become the first African woman to win a Grand Slam event in the professional era, which began in 1968.

Their match on Arthur Ashe Stadium was to follow the mixed doubles final between Australians Storm Sanders and John Peers, and the team of Kirsten Flipkens and Edouard Roger-Vasselin. 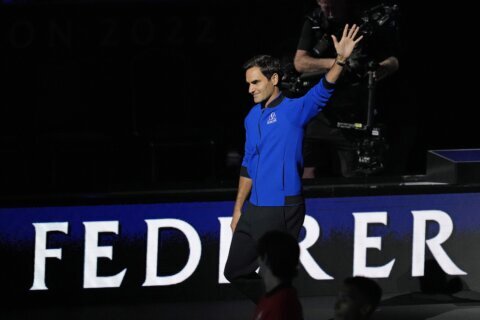 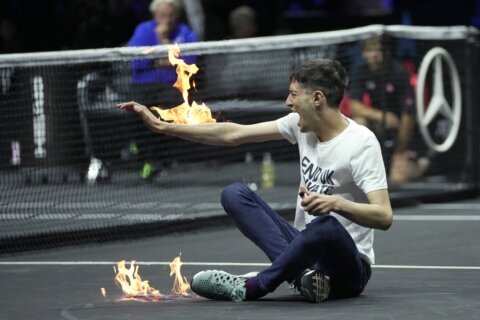