WIMBLEDON, England (AP) — This deficit was less daunting for Novak Djokovic. The tension less palpable. It’s not that he wants to fall behind in matches, of course. It’s that when he does, he knows how to deal with it.

“It’s amazing how the whole game can fall apart, really, just because you feel you’re tense. Then no shots are really working properly. Your feet are static and slow,” Djokovic said. “Something happens in a match, then all of a sudden it’s completely different and you’re flying. Everything flows.”

The top-seeded Djokovic fashioned a second consecutive comeback victory at Wimbledon on Friday, beating No. 9 seed Cam Norrie of Britain 2-6, 6-3, 6-2, 6-4 in the semifinals to run his winning streak at the All England Club to 27 matches in a row as he pursues a fourth straight championship on its grass courts.

“The more you experience these kind of situations, not the better you feel, but just more prepared you feel. You know what to expect,” Djokovic said. “It’s always really about handling your own nerves better than maybe your opponent is his own. This internal battle is always the greatest.”

He will face first-time major finalist Nick Kyrgios for the trophy on Sunday.

“The job,” Djokovic said, “is not finished.”

The unseeded Kyrgios, a combustible 27-year-old from Australia who drew jeers for the mere mention of his name during Djokovic’s on-court interview, did not need to play on Friday because 22-time Grand Slam champion Rafael Nadal withdrew with a torn abdominal muscle.

“Mouth-watering,” is how Kyrgios described the upcoming matchup.

He has won both previous meetings against Djokovic, although both were on hard courts five years ago.

“One thing is for sure,” Djokovic said. “There’s going to be a lot of fireworks, emotionally, from both.”

It will be the 32nd Grand Slam title match for Djokovic, breaking a tie for the men’s record he shared with Roger Federer, and gives the 35-year-old from Serbia a shot at a 21st major title and seventh at Wimbledon. Only Federer, with eight, owns more at the grass-court tournament among men.

On the steamiest afternoon of the fortnight, with the temperature at 85 degrees Fahrenheit (29 degrees Celsius) and the air still, Djokovic often looked displeased early, gesticulating toward his guest box. But unlike in the quarterfinals, when he dropped the opening two sets against Jannik Sinner before winning in five, it took little time for Djokovic to assert his dominance.

Exactly what allows Djokovic to trail, then win — he has seven career comebacks from a two-set hole, including in the 2021 French Open final — is hard to know. He claimed a talking-to in the bathroom helped against Sinner. He joked that donning a white hat after the first set made a difference against Norrie.

Asked at Friday’s news conference to explain the white bottle he appeared to inhale from during another match, Djokovic offered this tongue-in-cheek reply: “Magic potion.”

Djokovic vs. Norrie began auspiciously enough for locals hoping to see one of their own get to a men’s final, something only two-time Wimbledon champion Andy Murray has accomplished for Britain since the professional era began in 1968.

Roars came when the left-handed Norrie arose first from his seat; Djokovic was pouring some water on his hand and rubbing it in his hair. When Norrie’s volley winner completed a break in that initial game, he hopped and threw an uppercut. Union Jack flags waved in the stands.

Was the championship won? No. A berth in the final earned? Not that, either. All in all, it was quite a celebration after one of what would become 35 games, five of 202 points, four of 154 minutes.

When Djokovic broke right back, he walked to grab his white towel and dabbed at his perspiration. To him, this was not a monumental achievement.

Just one tiny example of how versatile and superb Djokovic is came on one particularly marvelous point. He hit a spinning half-volley on the move, but Norrie replied with a lob. So Djokovic ran back toward the baseline, the net behind him, and conjured up a between-the-legs, facing-the-wrong-way, high-arching lob of his own that somehow landed in. Norrie ran to that, twisted his body to reply with a forehand and Djokovic ended the 14-stroke exchange with a drop volley winner.

Even the partisans on hand cheered with approval. Djokovic raised his right index finger to the sky.

Still, only two of Norrie’s first 20 points came via winners he produced. Djokovic committed 12 unforced errors in the first set alone. One measure of how he restored order: Djokovic made 16 unforced errors over the last three sets combined.

Norrie, never before past the third round at a major, grew less sharp as Djokovic increased the pressure — within points and on the scoreboard. A particularly sloppy service game by Norrie, with a trio of unforced errors, helped Djokovic break to lead 5-3 in the second set.

“He kind of gifted me that,” said Djokovic, who would take 11 of 13 games in a match-shifting stretch.

He got broken three times in the first set, then never faced a break point the rest of the way.

Perhaps sensing their guy could use a boost, some fans offered chants of “Let’s go, Norrie, let’s go!” early in the third set. Didn’t change a thing.

Djokovic broke to open the third. Did the same in the fourth.

“Just locked it down,” Norrie said. 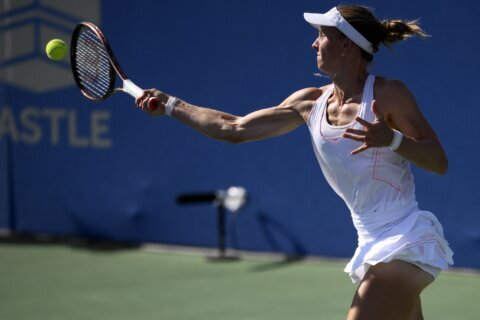 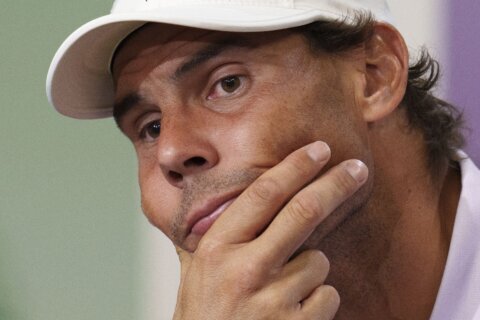 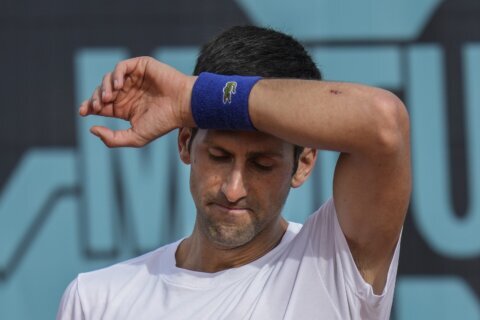