Casper Ruud has become the first man from Norway to reach the semifinals at a Grand Slam tournament, getting that far at the French Open by beating 19-year-old Holger Rune of Denmark 6-1, 4-6, 7-6 (2), 6-3.

Ruud leads the ATP with 65 wins in clay-court matches since the start of the 2020 season. That includes defeating 2019 French Open junior champion Rune four times.

Ruud ended up with just one more winner than the big-hitting Rune, 55-54, and that edge arrived on the very last point with a forehand that originally was called out before the chair umpire overruled and said the ball touched the line.

The big difference: Ruud made only 24 unforced errors, while Rune had 46.

Ruud will meet 2014 U.S. Open champion Marin Cilic on Friday for a berth in the final.

Rublev has now failed to get out of five quarterfinals at major tournaments, though he was applauded for two acts of sportsmanship that benefited his opponent during the match.

The 33-year-old Cilic will next face No. 8 Casper Ruud or teenager Holger Rune. The other men’s semifinal match is Rafael Nadal against Alexander Zverev.

With the win, the 20th-seeded Cilic became the first Croatian man to reach the semifinals at all four Grand Slam tournaments. He’s also just the fifth active men’s player to reach that mark, after Nadal, Novak Djokovic, Roger Federer and Andy Murray.

The 2018 Australian Open finalist — the last time Cilic reached at least a semifinal at a Grand Slam — used his big serve to win key points. He recorded 33 aces.

There were just four service breaks in the match, with Rublev forcing a decider by breaking Cilic’s serve for a 5-3 lead in the fourth set.

In the first-to-10 tiebreaker, Cilic fell behind 2-1 before winning the next nine points, clinching it on Rublev’s backhand return into the net.

Rublev indicated that a Cilic shot was in early in the tiebreaker. And at 1-all in the fifth set, Rublev volunteered to replay the first point of the game after Cilic’s shot was ruled out.

Top-ranked Iga Swiatek won her 33rd match in a row with a 6-3, 6-2 victory over 11th-seeded Jessica Pegula to advance to the semifinals of the French Open.

The 21-year-old Swiatek will next face Daria Kasatkina of Russia for a spot in the final.

Swiatek gained from what appeared to be a missed call in the seventh game of the first set. She chased down Pegula’s drop shot but it appeared to have bounced twice before she hit her winner to break and take a 4-3 lead.

At one point, Pegula complained to the chair umpire about Swiatek’s alleged delaying tactics between serves.

Swiatek, who won the 2020 French Open, had also beaten the American earlier in her winning streak.

The Polish player has won her past five tournaments, going unbeaten since February for the WTA’s longest such stretch since Serena Williams compiled a 34-match run in 2013.

Swiatek was aggressive throughout the match, compiling 30 winners though she had 28 unforced errors as well. She clinched it on her fourth match point.

Daria Kasatkina advanced to her first Grand Slam semifinal with a 6-4, 7-6 (5) win over Veronika Kudermetova at Roland Garros.

The 20th-seeded Kasatkina will next face either top-ranked Iga Swiatek or 11th-seeded Jessica Pegula.

In a quarterfinal matchup of 25-year-old Russians, Kasatkina built a 6-1 lead in the tiebreaker and finally clinched it on her fifth match point, beating Kudermetova with a backhand drop shot.

The 29th-seeded Kudermetova took a medical timeout to have her left foot taped after she held for a 6-5 lead in the second set. But she then lost nine of the next 10 points before her brief comeback in the tiebreaker.

Kasatkina has not dropped a set in her Roland Garros run. She hit only 16 winners but Kudermetova made 50 unforced errors — twice as many as Kasatkina.

Mauresmo said at a news conference Wednesday that she tried on a daily basis to find a women’s pairing that had the star power or matchup worthy of being highlighted in the separate session that began at 8:45 p.m. local time in Court Philippe Chatrier.

“I admit it was tough,” Mauresmo said.

She is overseeing the clay-court Grand Slam tournament for the first time.

Mauresmo won the Australian Open and Wimbledon in 2006. After retiring as a player, she moved into coaching and worked with Andy Murray among others.

The only women’s match that got the prime-time treatment — new at the French Open this year as part of a deal with a streaming service — was France’s Alizé Cornet’s victory over Jelena Ostapenko.

Top-ranked Iga Swiatek puts her 32-match winning streak on the line in one of four quarterfinal matches on Day 11 at the French Open.

Eleventh-seeded Jessica Pegula will try to snap Swiatek’s streak in a bid to reach her first Grand Slam semifinal. The 21-year-old Swiatek beat the American in Miami for win number 16 of the current streak.

The other women’s quarterfinal is the first of the day and it’s between two Russians: No. 20 Daria Kasatkina and No. 29 Veronika Kudermetova.

No. 7 Andrey Rublev plays No. 20 Marin Cilic in the first men’s quarterfinal of the day. Cilic won the 2014 U.S. Open and has been runner-up at the Australian Open and Wimbledon but has never been past the quarterfinals at Roland Garros.

No. 8 Casper Ruud of Norway faces teenager Holger Rune of Denmark in an all-Scandinavian night match. Ruud is 3-0 against the 19-year-old Rune with all three wins coming on clay including at Monte Carlo this season. 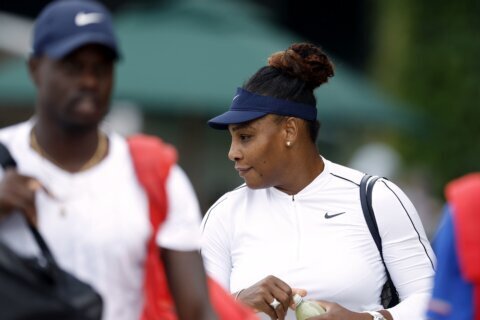 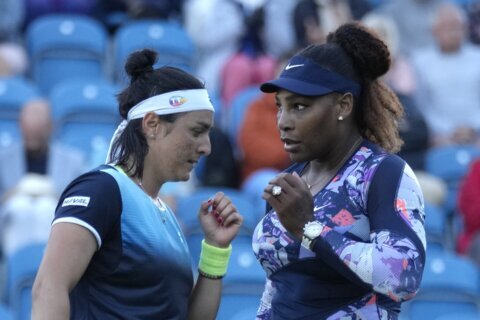 Williams out of Eastbourne because doubles partner injured