Carlos Alcaraz displayed deft drop shots and plenty of other skillful strokes to become the youngest man in the French Open’s fourth round since Novak Djokovic in 2006.

The 19-year-old Alcaraz advanced by beating 21-year-old American Sebastian Korda 6-4, 6-4, 6-2 under the lights at Court Philippe Chatrier on Friday night.

This outcome reversed the result of a meeting between the two at the Monte Carlo Open last month, which Korda won to account for Alcaraz’s lone loss on red clay in 20 matches in 2022.

It also was a much smoother ride for Alcaraz than in the second round at Roland Garros on Wednesday. In that one, needed to save a match point before coming back to win in five sets against fellow Spaniard Albert Ramos-Vinolas.

Alcaraz improved to 31-3 overall this year with a tour-leading four titles.

The tournament’s No. 6 seed will meet No. 21 Karen Khachanov on Sunday for a berth in the quarterfinals.

The 27th-seeded Korda’s father, Petr, was the runner-up at the 1992 French Open.

The 21st-seeded Khachanov improved to 5-0 in third-round matches at Roland Garros, although he only has reached the quarterfinals in Paris once, in 2019.

Norrie, meanwhile, has lost all five times he has made it to the third round at any Grand Slam tournament.

This was the first time since 2009 that all of the top 12 men’s seeds were in the third round at the French Open.

Top-ranked Novak Djokovic said he’s reached out to Boris Becker’s family to offer support after the tennis great was sentenced to prison for bankruptcy offenses.

Becker was sentenced to 2 1/2 years in prison for illicitly transferring large amounts of money and hiding assets after he was declared bankrupt.

Djokovic said after his third-round win at the French Open that he’s contacted Becker’s son, Noah, “asking if there is something that I could do, help, you know, just being there for his family members, you know, because I can’t get to him.”

The 54-year-old Becker coached Djokovic for three years from December 2013.

The three-time Wimbledon champion must serve at least 15 months before being eligible for release.

“It’s only been less than a month. I just hope that he will stay healthy and strong,” said Djokovic, who earlier said he’s “ heartbroken ” for the German.

The American was the runner-up in 2018 after having won the title at Flushing Meadows the year before.

Teichmann amassed 53 winners and 58 unforced errors against the 15th-seeded Azarenka.

The 13-time champion said it was the best of his three wins this week, at least up until Van de Zandschulp crept back into the third set. Nadal in his on-court interview said he was disappointed to miss a break point that would have put him up 5-0.

Nadal’s 301st win at Grand Slams means he will face ninth-seeded Felix Auger-Aliassime for a spot in the quarterfinals.

A French Open player has been fined $10,000 by the tournament after she threw her racket and it bounced off the clay and into the stands during a match.

Irina-Camelia Begu, a 31-year-old Romanian who is ranked 63rd, was cited for unsportsmanlike conduct during the third set of her victory against 30th-seeded Ekaterina Alexandrova in the second round at Court 13.

The match was Thursday. The fine was announced Friday.

After dropping a point, Begu walked to the sideline and chucked her racket, which flew behind chair umpire Anis Ressaissi’s seat, landing among spectators sitting courtside. There were gasps from fans and a child could be heard crying.

Tournament referee Remy Azemar said the equipment “brushed a young spectator,” who “turned out to be OK.”

Defending champion Novak Djokovic recorded another straight-set victory and will face Diego Schwartzman for a spot in the quarterfinals at the French Open.

The top-ranked Djokovic beat Aljaz Bedene of Slovenia 6-3, 6-3, 6-2 at Court Philippe Chatrier in 1 hour, 44 minutes — the quickest of his three wins.

Schwartzman’s 0-6 record against Djokovic includes a five-setter in the third round at the 2017 French Open. The Argentine is seeded 15th.

The 20-time Grand Slam champion hasn’t lost in the third round at Roland Garros since 2009.

Aliaksandra Sasnovich eliminated a Grand Slam champion for the second straight match to reach the fourth round at the French Open.

Sasnovich had defeated reigning U.S. Open champion Emma Raducanu in the second round.

She next faces Italian player Martina Trevisan, whose best result at a Grand Slam was the quarterfinals at Roland Garros two years ago.

Coco Gauff reached the fourth round at the French Open by beating Kaia Kanepi.

The young American is trying to improve on her quarterfinal run at Roland Garros a year ago.

Gauff had six aces — and five double-faults — while her Estonian opponent made 29 unforced errors. The teenager has not dropped a set in her first three matches.

Gauff next faces No. 31 Elise Mertens.

U.S. Open runner-up Leylah Fernandez has reached the fourth round at the French Open for the first time.

The 17th-seeded Fernandez broke Bencic in the 11th game of the deciding set and served out the match. She had saved two set points in the opener.

Fernandez next faces 20-year-old Amanda Anisimova, who reached the Roland Garros semifinals in 2019.

The best result by a Canadian woman at the French Open was Eugenie Bouchard making the semifinals in 2014.

Amanda Anisimova moved into the fourth round of the French Open when Karolina Muchova stopped playing after hurting her right ankle.

Muchova twisted her right foot while serving at 2-all in the second set. She went to the sideline during that game to get checked on by a doctor and a trainer, who taped up the ankle.

When play resumed after the medical timeout, Muchova dropped seven games in a row before retiring from the match.

Diego Schwartzman advanced to the fourth round of the French Open and a potential showdown with defending champion Novak Djokovic.

The 15th-seeded Schwartzman will next face either Djokovic or Aljaz Bedene. Schwartzman is 0-6 against Djokovic.

The big favorites in the men’s draw have third-round matches on Day 6 at the French Open.

In the nightcap on center court, sixth-seeded Carlos Alcaraz plays Sebastian Korda in what could be a tricky matchup for the 19-year-old Spaniard.

Alcaraz’s only loss in 19 matches on clay this season was to Korda. The 21-year-old American beat Alcaraz last month in Monte Carlo.

In the women’s draw, the youngest player remaining is 18-year-old Coco Gauff and she’ll face the oldest in 36-year-old Kaia Kanepi. 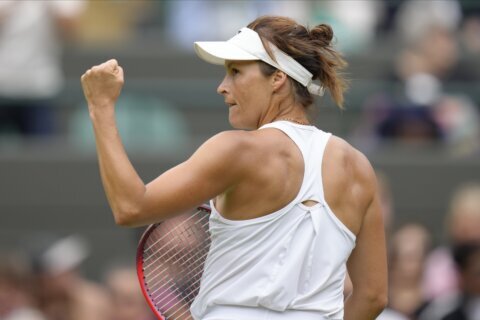 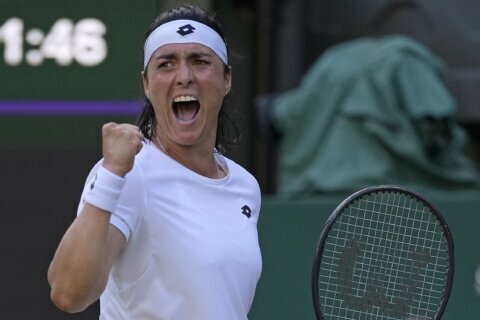 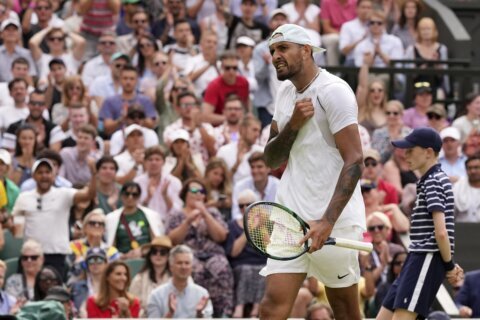