Swiatek continued her searing start to 2022 on Saturday, beating Naomi Osaka 6-4, 6-0 to win the women’s title at the Miami Open and extend her winning streak to 17 matches.

Swiatek, who will replace the now-retired Ashleigh Barty at No. 1 in the women’s rankings officially when the points are updated Monday, also completed the so-called Sunshine Double — winning both Indian Wells and Miami. She’s the fourth woman to do so, joining Victoria Azarenka (2016), Kim Clijsters (2005) and Steffi Graf (1994 and 1996).

“This tournament has so much energy,” Swiatek said.

Swiatek’s homeland is Poland, which has seen more than 2 million people enter from war-torn Ukraine in recent weeks. Swiatek took a moment during her trophy ceremony to acknowledge that those refugees are on her mind.

“As I was doing in my previous speeches at Doha and Indian Wells, I want to say to Ukraine to stay strong,” Swiatek said. “Everything’s going to get better.”

Swiatek broke Osaka for a 3-2 lead in the first set, hanging on from there to win a 52-minute slugfest that saw the opening game — on Osaka’s serve — feature seven deuces and go for 10 minutes.

Osaka came into the tournament ranked No. 77 in the world, though certainly didn’t play like there are 76 better women out there on tour right now — beating seeded players in Angelique Kerber, Danielle Collins and Belinda Bencic on her way to the final.

Osaka was as high as No. 13 earlier this year, saw her ranking take a huge hit when she was knocked out early from the Australian Open, and will likely rise to No. 36 when the numbers are officially updated Monday.

Miami was her first final since winning the 2021 Australian Open.

“It makes me feel so good, makes so many feel so good, to see you happy on the court again,” tournament director James Blake told Osaka during the trophy ceremony.

As the cheers from fans got louder after Blake said that, Osaka eventually broke into a wide smile.

Osaka has openly talked about struggling with depression and working on her mental health since winning the 2018 U.S. Open over Serena Williams. She withdrew from last year’s French Open, left last year’s U.S. Open in tears and was brought to tears again by the comment from a spectator at Indian Wells last month.

But in Miami, it was all happiness.

“I want to dedicate this one to all the people that support me, my fans,” Osaka said as she held the crystal runner-up trophy. “I know I haven’t been in this position for a little minute. I know this isn’t the outcome you guys wanted, but I’m having fun up here.”

Swiatek also had kind words for Osaka after the match: “This sport is better with you,” the soon-to-be women’s No. 1 told the former women’s No. 1.

Swiatek would still be No. 2 in the rankings if Barty hadn’t retired or hadn’t asked to be removed from the list. But the gap between 1 and 2 in that scenario would have been much closer — Barty led by Swiatek by 2,204 points when the Miami Open began and would have seen that margin sliced down to 269 points on Monday.

The men’s final in Miami is Sunday when No. 6 seed Casper Ruud will face No. 14 Carlos Alcaraz. 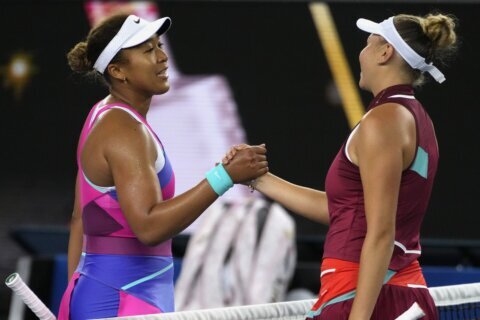 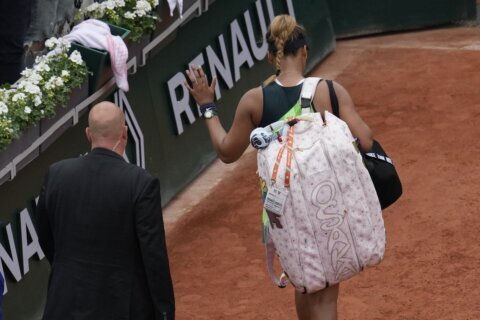 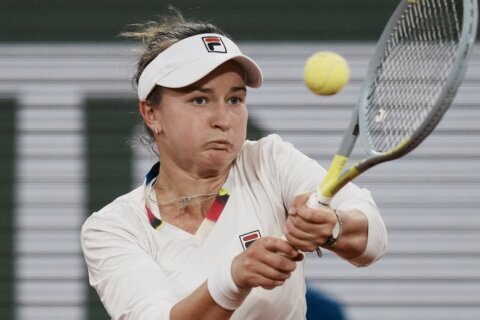 Defending champ Krejcikova loses to French foe in 1st round