Nadal beats Kyrgios in 3 sets at Indian Wells, goes to 19-0

“Happy about that third set because it wasn’t easy after the end of the second. It was terrible for me,” he said. “But I hold it emotionally, and mentally, I think I was ready to keep fighting.”

After the post-match handshake, Kyrgios walked to his seat and smashed his racket on the court. It bounced up and away, nearly striking a ball boy standing at the back of the court. Kyrgios walked off to a mix of boos and cheers.

“It landed a meter from my foot and skidded and nearly hit him,” Kyrgios said. “I’m human. Things happen like that. Obviously it was a very misfortunate bounce. I think if I did that a million times over it wouldn’t have gone that way.”

Nadal was on his side of the court and said he didn’t see Kyrgios toss his racket after the match.

“I think Nick had a great attitude during the whole match in terms of fighting spirit, and of course he has his personality, his character,” Nadal said. “Sometimes he does things that I don’t like, but I respect because of different character, different kind of points of view, and different kind of education.”

Trailing 0-6 in the first-set tiebreaker, Kyrgios was serving when the chair umpire assessed him a point penalty for an audible obscenity to a fan, giving Nadal the set. Kyrgios dropped the balls he was holding and calmly walked to his seat.

In the sixth game of the first set, Kyrgios led 40-love when he served underhanded. Nadal stepped up and bashed a forehand winner down the line. Kyrgios responded with a 140-mph ace to go up 4-2. He also had leads of 3-1 and 5-3 in the set.

Nadal won three straight games to lead 6-5 in the first. On the changeover, Kyrgios angrily tossed his racket. He gave the bent racket to a young boy in the stands.

“I was two points away from the first set and I felt like if I had won that first set, the way I was playing, I could have run away with it,” Kyrgios said. “So obviously, I was frustrated, but it was a hell of a match.”

Early in the second set, the chair umpire scolded a man in the stands who repeatedly yelled, “Nick! Nick!” The umpire said, “Ten thousand people want to watch tennis and you’re the only one screaming.” The man piped down. Later, the umpire told the crowd not to yell out between first and second serves.

Tied 3-all in the second set and serving at 40-love, Kyrgios served an underhanded ace to go up 4-3. They stayed on serve until Kyrgios broke Nadal in the 12th game. Nadal’s drop shot caught Kyrgios by surprise and the Australian let loose with an F-bomb during the point. He recovered to make the return, Nadal sent it back and Kyrgios won the set with a leaping backhand volley.

Tied 2-all in the third, Kyrgios engaged with a spectator sitting next to actor Ben Stiller. Uninterested in the man’s suggestions on how to play, Kyrgios replied that he didn’t tell Stiller how to act.

“When you’re a spectator and you’re watching professionals play tennis, you should just be quiet,” Kyrgios said. “Like, just sit and enjoy the show. I thought it was a pretty high level match and I’m just asking for a little bit of respect.”

The interaction didn’t deter the Aussie. He fought off a break point and took a 3-2 lead with back-to-back aces at 140 mph and 137 mph.

Kyrgios double-faulted on game point to trail 4-3. Kyrgios held to lead 5-4, but Nadal closed out the 2-hour, 46-minute match by serving a love game. He set up match point with a 116-mph ace and then hit a forehand winner off a short ball.

“He played a few points well and he got out of it and that’s what he does,” Kyrgios said. “That’s what makes him great.”

Defending women’s champion Paula Badosa advanced to the semifinals with a 6-3, 6-2 win over Veronika Kudermetova of Russia. Badosa next plays No. 6 seed Maria Sakkari, who defeated Elena Rybakina, 7-5, 6-4.

The other semifinal features No. 3 Iga Swiatek against 2015 champion Simona Halep. 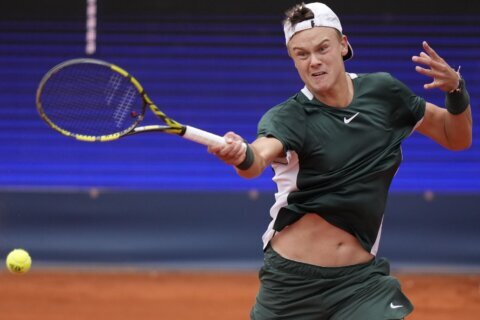 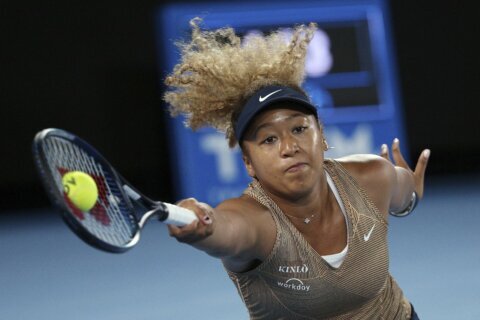 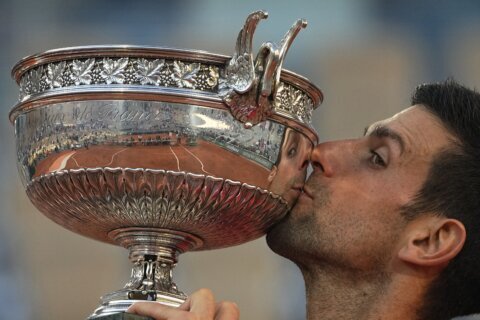