Home » Tennis » The Barty gets started…

The Barty gets started with a comeback win at Aussie Open

MELBOURNE, Australia (AP) — So this is how the Barty begins Down Under. Top-ranked Ash Barty lost the first set…

MELBOURNE, Australia (AP) — So this is how the Barty begins Down Under.

Top-ranked Ash Barty lost the first set of her first-round match at the Australian Open, where she’s aiming to be the first homegrown winner in more than 40 years, before recovering to beat Leisa Tsurenko 5-7, 6-1, 6-1.

The slightly leaky roof was closed on Rod Laver Arena as heavy rain lashed Melbourne on Monday, and the parochial home crowd was slightly subdued after Barty lost a first set containing a combined five breaks of serve. No worries, mate. The French Open champion “fixed a few things” in her approach, and Tsurenko won only two more games in the next 52 minutes.

“Absolutely incredible,” Barty said of her first match of the year on Melbourne Park’s premier stage. “Probably the moment I’ve been looking forward to the most in the off-season.”

She had only had one day off between winning her first title on Australia soil — in Adelaide on Saturday night — and her first Grand Slam match of the decade.

Tsurenko, a 30-year-old Ukrainian ranked No. 120, had won their only previous encounter and was proving difficult again in the first dozen games.

“Look, I think I was pressing a little bit early. Made a few too many errors,” said Barty, who is so Aussie that her name is used on the labels of Vegemite, that uniquely Australian food spread. “I was rushing it a little bit trying to finish off too early.

“But I was able to tighten the screws in the second set and run away with it.”

Barty’s breakout season in 2019 began with a run to the Australian Open quarterfinals, which launched the so-called Barty Party.

There’s bigger home expectations this time, now that she’s won a major — on clay at Roland Garros — ascended to No. 1 and finished off last year with victory in the WTA Finals and a run to the Fed Cup final for Australia.

It’s an impressive run for a 23-year-old allrounder who took time out from tennis to pursue a cricket career before returning to the tour in 2017, plays golf with a 10-handicap and closely follows her favorite club, Richmond, in the Australian Football League.

The pressure of playing at home isn’t something she struggles with.

“Slams always feel like there’s a lot of chaos going because there’s so many people. It’s busy with singles and doubles players, mixed players, families, coaches, everyone underneath. It’s just chaos,” she said. “When you’re able to separate that from when you step on the court is when you can do a little bit better, play a little bit better, feel a little bit more comfortable.”

“It’s an experience thing. You have to learn how to deal with it, but it’s getting better,” she said. “I’m doing it with my team. We’re doing it as a team. We’re loving it. We’re embracing it. There’s no other way to approach it.”

No Australian woman has won the national title since Chris O’Neil in 1978. For a long time, Australia’s main hopes of breaking that drought were on Sam Stosur. The 35-year-old Stosur has had to hand that responsibility over to Barty, and wish her luck.

Stosur beat Serena Williams to win the U.S. Open in 2011, a year after reaching the French Open final, but has never gone past the fourth round at Melbourne Park.

“I think all the Aussies would feel it,” Stosur said of the local expectations. “Some thrive on it, some find it a little bit harder.”

Stosur may not have been able to use the crowd to her advantage, but McNally worked out a way to do it.

“I knew the fans were going to be probably cheering against me, but I kind of just used that as an advantage,” she said. “To the beat of their cheering, I just said my name in my head, and it actually helped me a lot.” 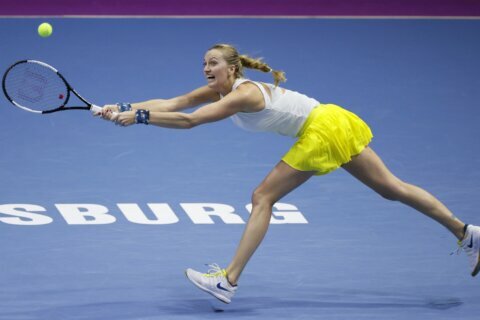