MELBOURNE, Australia (AP) — Nick Kyrgios put aside a bloody hand, a hamstring issue, a tiff with the chair umpire and a resilient opponent who saved a pair of match points.

When the Australian Open third-round thriller ended after about 4 1/2 hours Saturday, Kyrgios dropped to his back behind the baseline. Guess what’s next for the home-crowd favorite? A much-anticipated matchup with a familiar, but decidedly not friendly, foe: No. 1 Rafael Nadal.

Kyrgios initially was a point from winning at 6-5 in the third-set tiebreaker, then again an hour later at 8-7 in the fourth-set tiebreaker, but he needed yet another hour to pull out the victory when Khachanov pushed a backhand wide.

“I was losing it mentally, a little bit,” Kyrgios said. “I thought I was going to lose, honestly.”

Along the way, he hit a dive-and-roll backhand, scraped his knuckles and, after wiping the blood, was warned for a time violation. That set off Kyrgios, who explained why play was delayed and said to the chair umpire, “Are you stupid? Well, take it back then.”

There are sure to be more fireworks Monday during the eighth edition of Nadal vs. Kyrgios. Even so, Kyrgios tried to downplay the animosity Saturday, saying: “Whatever happens between us, he’s an amazing player. Arguably, he’s the greatest of all-time.”

So far, Nadal holds a 4-3 head-to-head edge, including a contentious win in their last meeting, at Wimbledon last July.

Nadal was not thrilled that Kyrgios hit a ball right at him in that match. Kyrgios took a different sort of shot at Nadal from afar the other day in Melbourne, mimicking the 33-year-old Spaniard’s series of mannerisms before he hits a serve.

“It’s clear, of course, that when he does stuff that in my opinion is not good, I don’t like (it). When he plays good tennis and he shows passion for this game, he is a positive player for our tour, and I want my tour bigger, not smaller. So the players who make the tour bigger are important for the tour,” Nadal said. “When he’s ready to play his best tennis and play with passion, (he) is one of these guys. When he’s doing the other stuff, of course I don’t like (it).”

Here’s what Nadal loved Saturday: The way he stepped things up during a 6-1, 6-2, 6-4 victory over 27th-seeded Pablo Carreno Busta that required fewer than 100 minutes.

“I needed to improve,” Nadal said, “and I improved.”

He never offered his opponent a break chance.

He finished with a total of merely seven unforced errors among the match’s 125 total points — and six times as many winners at 42.

“My best match of the tournament so far, without a doubt,” Nadal said. “Big difference between today and the previous days.”

Against “this Rafa,” Carreno Busta said, “you feel a little powerless.”

“When he plays that comfortably,” Carreno Busta said, “there’s nothing you can do.”

And to think: Nadal did this after staying up late enough to watch on TV as the man he’s chasing in the Grand Slam count, Roger Federer, was pushed to a fifth-set tiebreaker before getting through to the fourth round at nearly 1 a.m.

That was part of a chaotic Day 5 — including losses by Serena Williams and reigning champion Naomi Osaka, who was ousted by 15-year-old sensation Coco Gauff — and the trend continued on Day 6 on the women’s side.

No. 2 Karolina Pliskova, No. 5 Elina Svitolina and No. 6 Belinda Bencic all lost in straight sets, meaning nine of the top 13 seeds already are gone.

Pliskova, the 2016 U.S. Open runner-up, lost 7-6 (4), 7-6 (3) to 30th-seeded Anastasia Pavlyuchenkova. Svitolina, a semifinalist at the past two majors, was beaten 6-1, 6-2 by two-time Slam champ Garbiñe Muguruza. Bencic, a semifinalist at Flushing Meadows last September, offered even less pushback while being defeated 6-0, 6-1 in 49 minutes by 28th-seeded Anett Kontaveit.

“At this level, everything can happen,” two-time major champion Simona Halep said about all of the surprises, “so that’s why sometimes I’m a little bit stressed.”

Other men’s fourth-round matchups on the top half of the draw will be No. 5 Dominic Thiem against No. 10 Gael Monfils, No 7 Alexander Zverev against No. 17 Andrey Rublev, and three-time major champion Stan Wawrinka against No. 4 Daniil Medvedev.

Nadal won the Australian Open back in 2009 and has been the runner-up four times since, including a year ago against Novak Djokovic.

He’s said he is not focused on whether he gets one more by the end of these two weeks to pull even with Federer at 20 majors — or where he ends up in the final count (Djokovic is third on the list with 16 at the moment.)

Likewise, Federer says he figures he knows both of those rivals will overtake him in the Slam standings at some point.

For now, Nadal is tracking his progress on a match-by-match basis.

And for one warm, sunny afternoon in Rod Laver Arena, at least, he was pleased. 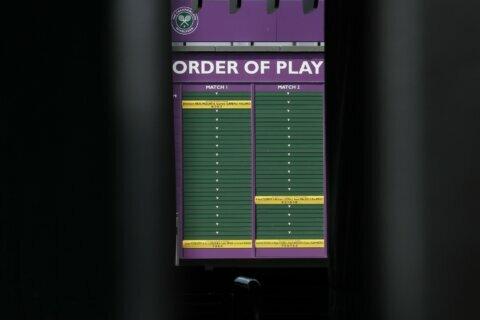 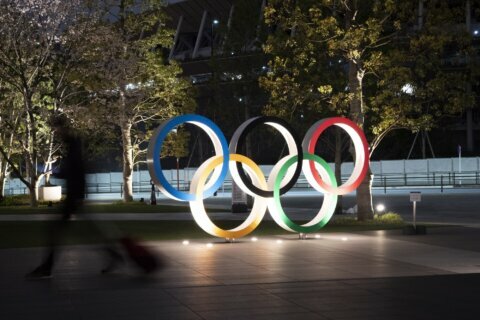