The court, by a 6-3 vote, reversed a lower court ruling in deciding that Arizona’s limits on who can return early ballots for another person and refusal to count ballots cast in the wrong precinct are not racially discriminatory.
Listen now to WTOP News WTOP.com | Alexa | Google Home | WTOP App | 103.5 FM

The court’s 6-3 ruling upheld voting limits in Arizona that a lower court had found discriminatory under the federal Voting Rights Act. It was the high court’s second major decision in eight years that civil rights groups and liberal dissenting justices say weakened the Civil Rights-era law that was intended to eradicate discrimination in voting.

The decision fueled new calls from Democrats to pass federal legislation, blocked by Senate Republicans, that would counter the new state laws. Some lawmakers and liberal groups also favor Supreme Court changes that include expanding the nine-justice bench.

“The court’s decision, harmful as it is, does not limit Congress’ ability to repair the damage done today: it puts the burden back on Congress to restore the Voting Rights Act to its intended strength,” President Joe Biden said in a statement.

Biden’s Justice Department had actually taken the position that the Arizona measures did not violate the Voting Rights Act, but favored a narrower ruling than the one handed down Thursday.

In an opinion by Justice Samuel Alito, the court reversed an appellate ruling in deciding that Arizona’s regulations on who can return early ballots for another person and on refusing to count ballots cast in the wrong precinct are not racially discriminatory.

The federal appeals court in San Francisco had held that the measures disproportionately affected Black, Hispanic and Native American voters in violation of a part of the Voting Rights Act known as Section 2.

Alito wrote for the conservative majority that the state’s interest in the integrity of elections justified the measures and that voters faced “modest burdens” at most.

The court rejected the idea that showing a state law disproportionately affects minority voters is enough to prove a violation of law.

In a scathing dissent, Justice Elena Kagan wrote that the court was weakening the federal voting rights law for the second time in eight years.

“What is tragic here is that the Court has (yet again) rewritten — in order to weaken — a statute that stands as a monument to America’s greatness, and protects against its basest impulses. What is tragic is that the Court has damaged a statute designed to bring about ‘the end of discrimination in voting.’ I respectfully dissent,” Kagan wrote, joined by the other two liberal justices.

Election law expert Rick Hasen wrote on his blog that the decision “severely weakened” Section 2 of the Voting Rights Act. He noted that this decision along with others over the past 15 years have “taken away all the major available tools for going after voting restrictions.”

“This is not a death blow for Section 2 claims, but it will make it much, much harder for such challenges to succeed,” Hasen, a professor at the University of California, Irvine, Law School, wrote.

Sen. Tim Kaine of Virginia was among Democrats who said the high court’s decision “raises the sense of urgency for Congress to pass comprehensive voting rights legislation.” Sen. Ed Markey of Massachusetts called for passage of his legislation expanding the court to 13 justices “to restore balance to our top court.”

With Republicans united in opposition to those measures, Democrats first would have to change Senate filibuster rules that require 60 votes for most legislation.

The challenged Arizona provisions remained in effect in 2020 because the case was still making its way through the courts.

Biden narrowly won Arizona last year, and since 2018, the state has elected two Democratic senators. Arizona’s most populous county, Maricopa, has been in the midst of a Republican-led audit challenging last year’s vote.

Thursday’s Supreme Court ruling came eight years after the high court took away what had been the Justice Department’s most effective tool for combating discriminatory voting laws — a different provision of the federal law that required the government or a court to clear voting changes before they could take effect in Arizona and other states, mainly in the South, with a history of discrimination.

Many of the state measures that have been enacted since then would never have been allowed to take effect if the advance clearance provision of the Voting Rights Act had remained in force.

Left in place was Section 2, with its prohibition on rules that make it harder for minorities to exercise their right to vote. At the heart of the Arizona case was the standard for proving a violation of the law.

Alito cautioned that the court did not on Thursday “announce a test to govern all … claims involving rules, like those at issue here, that specify the time, place, or manner for casting ballots.”

Many Republicans continue to question the 2020 election’s outcome, despite the absence of evidence. Republican elected officials in a number of states have responded by enacting restrictions on early voting and mailed-in ballots, as well as tougher voter identification laws.

Kagan pointed to some of the new laws in her dissenting opinion.

“Those laws shorten the time polls are open, both on Election Day and before. They impose new prerequisites to voting by mail, and shorten the windows to apply for and return mail ballots. They make it harder to register to vote, and easier to purge voters from the rolls. Two laws even ban handing out food or water to voters standing in line,” she wrote.

Republican National Committee Chairwoman Ronna McDaniel called Thursday’s ruling “a resounding victory for election integrity and the rule of law. Democrats were attempting to make Arizona ballots less secure for political gain, and the Court saw right through their partisan lies. In Arizona and across the nation, states know best how to manage their own elections.”

Democratic elections lawyer Marc Elias vowed the legal fight against the new laws would continue. “If anyone thinks that this decision will stop us from fighting for voting rights, they are wrong. We will fight harder with every tool available to protect voters from suppressive laws,” Elias wrote on Twitter.

Associated Press writer Christina A. Cassidy contributed to this report from Atlanta. 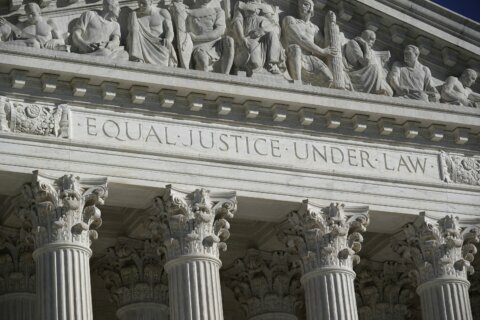