No. 2 Kansas extends home win streak against Oklahoma to 22

Kansas (14-1, 3-0 Big 12) got 17 points from Jalen Wilson, 11 from Dajuan Harris and 10 from Zach Clemence. The Jayhawks have won 22 straight games against Oklahoma in Allen Fieldhouse, including 16 straight under coach Bill Self.

Kansas went more than 12 minutes without a field goal in the second half, but Adams ended that streak with a thunderous dunk at the 5:06 mark.

KNOXVILLE, Tenn. (AP) — Santiago Vescovi and Julian Phillips each scored 15 points as Tennessee recovered from a halftime deficit to pull out a win over Vanderbilt.

Vescovi scored 12 of his points in the second half to lead the recovery for the Volunteers (14-2, 4-0 Southeastern Conference), who won their 25th straight game at Thompson-Boling Arena. Uros Plavsic contributed 11 points.

Vandy’s 7-foot Liam Robbins won the battle of the big men with 18 points off the bench. Noah Shelby had 12 points and Jordan Wright added 13 for Vanderbilt (8-8, 1-2).

Johnson added 12 points and Desi Sills had 11 for the Wildcats (15-1, 4-0 Big 12), who won their ninth straight and matched their victory total from last season. Predicted to finish last in the Big 12, Kansas State went from unranked last week to just outside the top 10 in the AP poll.

Bacot rolled his ankle 1:18 into the game and did not return. RJ Davis led the Tar Heels (11-6, 3-3) with 16 points and Caleb Love and Jalen Washington added 13 each. Washington, a freshman, played 27 minutes in Bacot’s absence.

Jaren Holmes added 15 points. Caleb Grill finished with 14 after hitting four of his first six 3-pointers. Iowa State finished 12 of 22 from behind the arc.

MADISON, Wis. (AP) — A.J. Hoggard made a tiebreaking layup with 41 seconds left and Michigan State rallied past Wisconsin for its seventh consecutive victory in a game that had 14 lead changes.

OXFORD, Miss. (AP) — Wendell Green Jr. scored 23 points, including 18 in the second half, and Auburn dominated after halftime to beat Mississippi.

The Aztecs (13-3, 4-0 MWC) dominated on both ends of Steve Fisher Court in a showdown between the last two undefeated teams in the conference to extend their winning streak to six games. Keshad Johnson added 11 points for SDSU, which has beaten Nevada nine straight times. 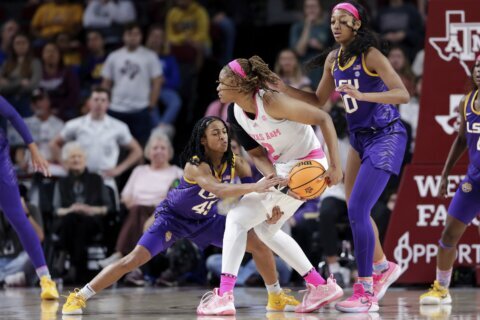