There are six third-round replays in the FA Cup, with Liverpool looking to stay in realistic contention for a domestic trophy by beating Wolverhampton in an all-Premier League matchup. An entertaining game ended 2-2 at Anfield on Jan. 7 and was tinged with controversy with Wolves having a late goal disallowed because of an offside not picked up by VAR cameras. Liverpool’s only game since then was a 3-0 loss at Brighton in the league on Saturday, a low point in the team’s season. Liverpool is in ninth place in the league, 19 points off first place, and already out of the League Cup. Among the other replays, non-league teams Chesterfield and Boreham Wood from the fifth tier of English soccer are in action against second-tier West Bromwich Albion and third-tier Accrington Stanley, respectively.

New Cremonese coach Davide Ballardini faces a difficult first match in charge as his side visits Serie A leader Napoli in the Italian Cup. Ballardini was appointed on Sunday to replace Massimiliano Alvini, who was fired after Cremonese’s 11th defeat in 18 league matches left it bottom of the table. Cremonese is without a league win although it has beaten second-division sides Ternana and Modena in previous rounds of the cup. Napoli is nine points clear at the top of Serie A and will be even more full of confidence after humiliating Juventus 5-1 on Friday. The winner will face Roma in the quarterfinals. 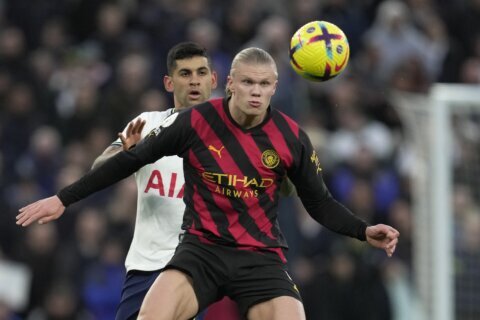 Joshua starts on comeback trail against Franklin on April 1