Two months later, his expectations have been exceeded.

Bryce Hopkins scored 27 points and Providence dominated the second half and knocked off fourth-ranked UConn 73-61 on Wednesday night for its eighth straight victory.

Noah Locke finished with 17 points. Ed Croswell added 13 points and 13 rebounds to help the Friars (13-3, 5-0) earn their second victory over a ranked team this season and remain unbeaten in the Big East.

“I thought our men stepped up to the challenge,” Cooley said of the Friars’ first home win over a top 5 team since beating Villanova on Feb. 14, 2018.

Hopkins led the attack throughout, drawing fouls and connecting on 13 of 15 attempts at the free-throw line. He said his teammates did a good job of finding him in space.

“They gave me the ball in my spots, and I just had to take advantage of that,” he said.

It marked Providence’s first win over the Huskies at the downtown Amica Mutual Pavilion since Feb. 20, 2012, when the Friars won 72-70. They played on campus during the pandemic.

The Huskies have lost two in a row after opening the season with 14 straight victories and winning their first three conference games. UConn was held under 70 points for only the second time this season. The Huskies entered averaging 82 points per game. They shot just 36% (23 of 63) in the second half.

“Just really embarrassed by the way we handled ourselves in the second half,” UConn coach Dan Hurley said. “They were just a lot tougher than we were.”

The Friars added to a three-point halftime lead thanks to going 8 of 18 from the 3-point line and outscoring the Huskies 29-10 at the free-throw line.

“We were fortunate that we made some shots. We made some timely shots,” Cooley said.

UConn cut it to 60-55, and a few possessions later Hopkins was whistled for his fourth foul with 4:54 left. But he stayed aggressive, getting fouled after a Huskies turnover and dropping in a pair of free throws to help Providence pushed the lead back up to 64-55 with 3:33 showing on the clock.

Providence won a mad scramble after three misses on its next possession, with Locke dropping in a deep 3 from the wing.

“I have a lot of confidence in myself,” Locke said. “When I’m in those type of situations I want those shots and I want to take them.”

Providence led for just 2:26 in the first half but used a late surge to take a 33-30 edge into the break.

Providence was able to generate offense without starter Jared Bynum, who went to the locker room with a midsection injury and sat out the rest of the game. Alyn Breed took his place in the lineup to begin the second half.

UConn: This is not the start to conference play the Huskies were looking for after winning their first three. They lost 83-73 at No. 22 Xavier over the weekend.

Providence: The Friars continue to find a way to stay in ball games, this time negating a big height disadvantage by hitting outside shots and getting to the line. That will help them stay in almost every game as they try to defend their regular-season Big East title. 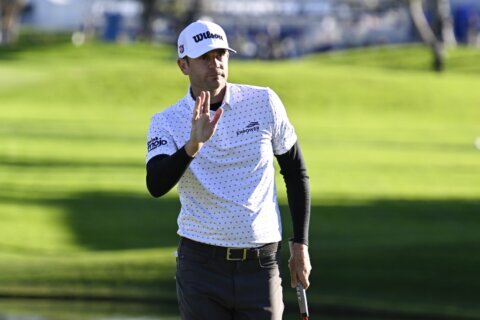