LOS ANGELES (AP) — After a cross-country trip, the Boston Bruins followed up their win in the Winter Classic with another milestone victory.

Trent Frederic scored twice in 34 seconds during the third period as the Bruins extended their point streak to 12 games and posted their 30th win of the season with a 5-2 victory over the Los Angeles Kings on Thursday night.

“We just want to keep things rolling. We know how good we are and games like this, where you have a little adversity with travel or whatever, you want to get on top and get those two points,” said goaltender Jeremy Swayman, who made 27 saves. “It’s a feel-good win, but at the same time, we’re still not satisfied.”

Swayman made some history of his own, defeating Pheonix Copley in the first NHL matchup of goalies born in Alaska. Swayman is from Anchorage while Copley hails from North Pole, Alaska.

“I know what it took Pheonix to get here. To represent such an incredible state on the biggest stage, it’s pretty incredible,” Swayman said. “I’m really excited to be a part of that with him.”

Copley made 17 saves, but his seven-game winning streak was snapped.

Frederic put in the go-ahead goal at 10:36 when he redirected Brandon Carlo’s shot from the point. The Boston center then quickly picked up his career-high ninth goal of the season at 11:10 when he beat Copley with a backhand in front.

“I was actually ready to change (shifts) after scoring the first one. Too much on the celebration. I was lucky enough, I stayed out there,” Frederic said.

David Pastrnak also had two goals and leads Boston with 27 on the season. Brad Marchand had a goal and an assist, and Charlie McAvoy added two assists for the Bruins, who are 9-0-3 in their last 12 games. That included Monday’s 2-1 victory over Pittsburgh in the Winter Classic at Fenway Park.

Phillip Danault and Sean Durzi scored for Los Angeles, which has dropped two of three after picking up a point in seven straight games.

“They’re patient, they wait for their opportunities,” Kings coach Todd McLellan said. “Really good teams take advantage of those moments. And I think we’re becoming that. We’re not quite there yet, but we can do it.”

Danault gave the Kings a 1-0 lead at 16:04 of the first period when he got a great pass from Alex Iafallo in front and lifted a wrist shot over Swayman’s skate. The goal gave Danault a point in eight of his last nine games.

Boston grabbed the lead with a pair of goals a little more than two minutes apart in the second. Pastrnak buried a snap shot from the slot at 6:26. After Los Angeles’ Blake Lizotte was called for hooking at 8:41, Marchand put in a wrist shot at a sharp angle from the right faceoff circle that Copley was unable to get with his glove six seconds into the power play.

Durzi evened it at 11:09 of the second on a one-timer off a pass from Matt Roy.

Pastrnak added an empty-net goal at 17:33 of the third.

“I liked the pace of our play. Our transition offense was instant. Our forwards were reloading. Our defensemen had tight gaps,” Bruins coach Jim Montgomery said. “I thought the pucks were moving quickly and guys had their heads up. I think by far the best game we’ve played in a while.”

Viktor Arvidsson was as close as anyone could get to giving the Kings a 3-2 lead with three minutes left in the second period.

Arvidsson’s shot from the right faceoff circle hit Swayman’s pads and deflected over his shoulders. The puck appeared to be trickling into the net, but it flipped up at the last second, stayed upright and rode the goal line after hitting the post before Swayman deflected it away with his stick and covered the puck with his glove to stop play.

Kings: At the Vegas Golden Knights on Saturday in a matchup between the top two teams in the Pacific Division. 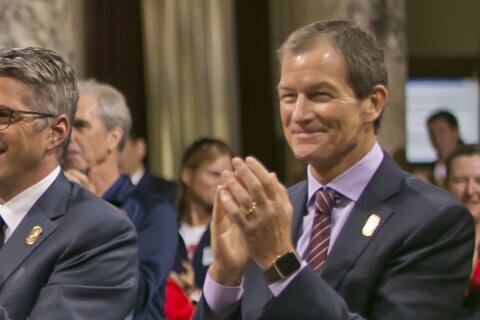 Raphinha gets another chance for Barcelona with Dembélé out