CLEVELAND (AP) — The Cleveland Guardians reached agreement Friday on contracts with all seven of their arbitration eligible players, including starter Shane Bieber, who agreed to a $10.01 million deal for next season.

Bieber made $6 million last season while going 13-8 and leading Cleveland’s strong pitching staff in innings (200) and strikeouts (198). The 27-year-old has expressed interest in signing a long-term deal with the AL Central champions, but to this point the sides haven’t been able to work out a deal.

A two-time All-Star, Bieber is under team control for two more seasons.

Karinchak was the final player to agree to his 2023 contract.

Rosario made $4.95 million last season while established himself as one of the team’s core players. He batted .283 with 11 homers and 71 RBIs. Rosario also led the AL with nine triples and played solid defensively.

Plesac had a rough 2022 season. The right-hander went just 3-12 with a 4.31 ERA in 24 starts. He also missed time after breaking his right hand when he punched the ground in frustration during a start in Seattle.

Civale spent last season dealing with an assortment of injuries. Manager Terry Francona started him in the decisive Game 5 of the AL Division Series against the New York Yankees and Civale didn’t get out of the first inning.

Naylor was one of several bright stories for Cleveland. He came back from a badly broken right ankle to have his most productive season, batting .256 with 79 RBIs. He was also the team’s fiery on-field leader, setting the tone with his hustle, clutch hitting and animated celebrations, including a head butt of Francona after a homer that broke the manager’s glasses.

Karinchak missed the first three months while recovering from a shoulder injury. After joining the club, the right-hander helped solidify the back end of Cleveland’s bullpen. He recorded three saves while striking out 62 in just 39 innings. 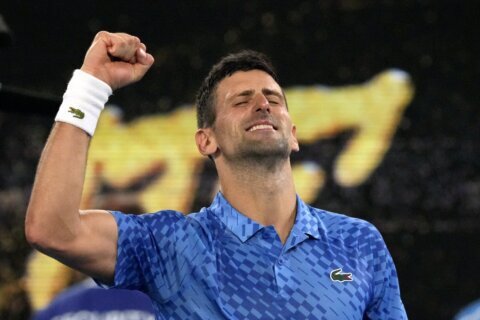