Annika Sorenstam’s first time inside the ropes at a professional men’s tournament was on the European tour at the Scandinavian…
Listen now to WTOP News WTOP.com | Alexa | Google Home | WTOP App | 103.5 FM

Annika Sorenstam’s first time inside the ropes at a professional men’s tournament was on the European tour at the Scandinavian Enterprise Open. She was a caddie.

“I was on the national team, and my sister (Charlotta) and I went to caddie, and there was another girl there,” Sorenstam said. “At that time, people didn’t have regular caddies. You showed up early and waited in the parking lot. Of course, we were the last ones picked.”

She recalls caddying for Peter Teravainen, and while he missed the cut, Sorenstam felt rich by the end of the week.

“He played balata golf balls. They were expensive, and he changed them out on every hole, which I couldn’t believe,” she said. “And he gave them to me, and so my pockets were filled with balatas balls.”

Teravainen years later had another caddie, golf author Michael Bamberger, who wrote about the experience in the highly entertaining book, “To The Linksland.”

But there was another name from the past.

At the end of the week, the other girl in the parking lot had such a good time as a caddie that she asked Sorenstam if she had any interest in joining her at the next stop, the PLM Open, in the south of Sweden.

“I said: ‘That’s not what I want to do. I have to go practice,’” Sorenstam said.

And so she continued to hone her game, which eventually took her to the University of Arizona, a pair of U.S. Women’s Open titles, eventually 72 wins on the LPGA Tour and 10 majors, becoming a household name by competing on the PGA Tour at Colonial.

That other girl was Fanny Sunesson. She caddied that week for Jaime Gonzalez, which led to Jose Rivero, Howard Clark and eventually to Nick Faldo and two of his Masters titles.

Sunesson remembers the day well at the Scandinavian Open. She had played a few junior events with Sorenstam and realized she was going to follow Swedish greats like Liselotte Neumann and Helen Alfredsson.

“I stood there in line and asked every player if they wanted a caddie,” Sunesson said. “They said they had one or didn’t need one, and then they picked the guy behind me.”

No matter. She loved the work. And like Sorenstam, she was thrilled to get the balata golf balls from Gonzalez (“It was like Christmas had come early,” she said). She stuck with it and became one of the most recognizable caddies in golf.

They worked that day at Ullna Golf and Country Club, about 15 miles north of Stockholm. Ullna next year hosts the Scandinavian Mixed, and Sorenstam will be there. The teenager who once showed up as a caddie is now the tournament host.

AUDIENCE WITH THE KING

Mark O’Meara keeps every Masters invitation and dinner menu from the Masters Club gathering on Tuesday night. But he’s not big on getting players to sign memorabilia, with one exception. He never had an autograph from Arnold Palmer.

This was in 2016, which turned out to be the last Masters for Palmer. He died some five months later.

O’Meara went to his locker to fetch a Masters flag and went looking for the King.

“He’s sitting with Tiger at the little table and I said, ‘Hey, AP, would you sign this flag? It will only be mine. I won’t sell it. I’d really appreciate it,’” O’Meara said. “He looks right at me and goes, ‘You think I’m going somewhere?’”

O’Meara said Palmer took the flag and delivered one of golf’s most famous (and legible) signatures. O’Meara thanked him and got up to leave.

He said he was startled briefly, but only until Palmer starting asking questions about O’Meara and his wife and family.

The final Official World Golf Ranking of the year was published Monday. Rory McIlroy ends the year at No. 1 for the third time. Four players among the top 50 — Ryan Fox, Sepp Straka, Sahith Theegala and Kurt Kitayama — started the year outside the top 50.

Also worth noting is the effect on Saudi-funded LIV Golf.

LIV did not receive ranking points since it began in June, and there is no indication when the OWGR will offer them. Now only two LIV golfers — Smith at No. 3 and Joaquin Niemann at No. 22 are among the top 25.

In some cases, injuries or mediocre play contributed to the slide before LIV came along, such as DeChambeau or Matthew Wolff.

The biggest fall belonged to Phil Mickelson, who sat out four months and had only one top-10 finish — his win at the 2021 PGA Championship — in the last two years. Mickelson ended last year at No. 33. He ends this year at No. 213.

It’s the first time Mickelson has been out of the top 200 in the world ranking since late July 1992 — a year before Jordan Spieth was born. Mickelson was runner-up to Brad Faxon in the New England Classic and moved to No. 175.

The European tour has a new agreement with Sky Italia that will bring tour-sanctioned events (including majors) and the Ryder Cup to Sky Sport Golf for 2023. The dedicated channel launches the second week in January with the Hero Cup in Abu Dhabi. … The Japan Golf Tour is adding two tournaments to its schedule next year, one of them the Hana Bank Invitational that will be co-sanctioned with the Korea PGA and played June 15-18, the same week as the U.S. Open. … Antoine Rozner of France and Richard Mansell of England have been added to the rosters for the Hero Cup on Jan. 13-15, which pits a Continental Europe team against Britain and Ireland in Ryder Cup-styled matches. Rozner recently won the Mauritius Open.

Justin Rose finished the year outside the top 50 in the world ranking for the first time since 2009.

“I really assume it will be an atmosphere. It’s got to be an atmosphere. There’s a few hard-nosed guys who might want to say something.” — Three-time Masters champion Nick Faldo on a Masters Club dinner this year at Augusta National that will have six players who have defected to Saudi-funded LIV Golf. 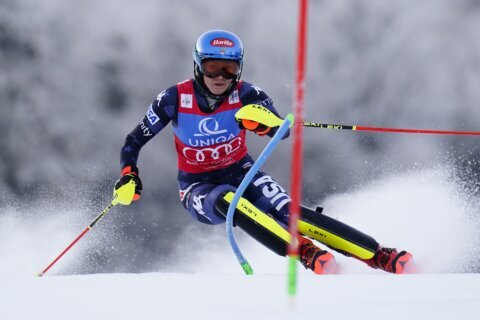 Shiffrin must wait for record win 86 but takes slalom title