BOSTON (AP) — Former Boston pitcher Daisuke Matsuzaka passed along some advice to Masataka Yoshida, another Japanese star who came over to play for the Red Sox.

“His advice to me: Boston is really cold,” the 29-year-old outfielder said through a translator on Thursday after he signed a five-year, $90 million deal with the Red Sox. “Obviously, you have to bring your jacket.”

Yoshida won a gold medal at the Tokyo Olympics and twice led Japan’s Pacific League in batting. He also helped Orix to a victory in the Japan Series in October, homering twice in Game 5 — including a walk-off as the Buffaloes rallied from a ninth-inning deficit.

“We became the champion in Japan. Next season, I would like to contribute to your world championship for the Red Sox,” he said, offering this assessment of Fenway Park upon seeing it for the first time: “The Green Monster is really tall.”

Yoshida has a .326 average with a .419 on-base percentage in seven seasons in Japan, all with Orix.

He greeted the Boston media on Thursday by explaining — in English — that he doesn’t speak English.

“So, nervous,” he said. “I want to learn English and I want to speak it my daughters. I am honored to be in Red Sox Nation. I will do my best. Thank you.”

Although the Red Sox have signed other Japanese players — including closer Koji Uehara, who helped them win it all in 2013 — Yoshida is Boston’s highest-profile addition from Japan since Matsuzaka arrived in 2007 after a bidding war that resulted in the team paying more than $100 million in posting fees and salary.

The Red Sox never let this one get to that, making an offer on the first day teams were allowed to talk to Yoshida’s agent, Scott Boras, and convincing him to cancel scheduled Zooms with other teams.

“You have to be prepared with the evaluation of the player when the light turns green,” Red Sox chief baseball officer Chaim Bloom said. “We felt we were. We knew that there was going to be a lot of interest.”

Word of Yoshida’s signing first emerged at the winter meetings at the same time that free agent shortstop Xander Bogaerts agreed to leave the Red Sox and join the San Diego Padres. Bogaerts had been the cornerstone of Boston’s offseason plans.

To make room for Yoshida on the roster, Boston designated infielder Jeter Downs for assignment. Downs had been acquired in the trade that sent former Mookie Betts to the Los Angeles Dodgers and hit .154 in a 14-game major league tryout.

“I think that speaks to some of the struggles we’ve had getting him on track,” Bloom said. “I still think there’s a lot of physical ability there, but we haven’t been able to unlock it consistently.”

Bloom said there was no added disappointment in setting Downs free just because he was a key part of a decision — already unpopular — to trade Betts, the 2018 AL MVP.

“No doubt he’s a big part of a really significant trade, and that we haven’t gotten him to the level that we expected hurts,” Bloom said. “But at the end of the day, we we want to do right by all of the players. And he was the right decision (in) this case.”

Ancelotti: Attacks on Vinícius a problem of Spanish soccer 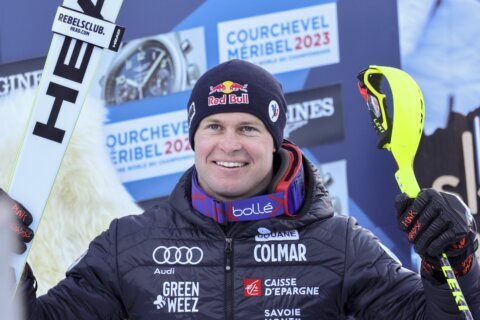 Pinturault’s gold adds to his family’s legacy in Courchevel