FAYETTEVILLE, Ark. (AP) — Angel Reese and Alexis Morris each scored 19 points to lead No. 9 LSU past No. 24 Arkansas in both teams’ SEC opener Thursday night, 69-45.

The Tigers (13-0), who remained one of only five Division teams still unbeaten, didn’t trail after the fourth minute of the game. Arkansas limited LSU to just 34% shooting, but LSU used its size to control the game on both ends.

Arkansas (13-3), which lost its third game in a row, managed to shoot only 28% and were dominated in the paint.

LSU outrebounded Arkansas 62-30, scored 22 second-chance points to the Razorbacks’ 7 and outscored Arkansas in the paint 30-22.

“I thought the 23 offensive rebounds, that’s who we are. As you watch us play, we’re going to the boards,” LSU coach Kim Mulkey said.

Reese, who finished with a double-double by grabbing 16 rebounds, was one of three LSU players who had double-digit boards. Flau’jae Johnson had 11, to go along with 10 points, and LaDazhia Williams had 15 rebounds.

Samara Spencer was the Razorbacks’ best player with 17 points on 7 of 15 shooting. The rest of the team went a combined 10 of 46 from the floor.

LSU has only had one win by a single-digit margin and could stay unbeaten for a while as the Tigers don’t play another team receiving votes in the Top 25 until Feb. 12 at No. 1 South Carolina.

Arkansas: Travels to Kentucky on Sunday

POLL ALERT: Indiana moves up to No. 2 in women’s AP Top 25 for its best ranking ever; South Carolina remains No. 1 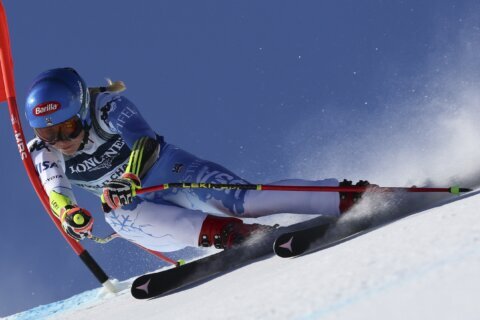