COLUMBUS, Ohio (AP) — No. 3 Ohio State specializes in pressure and forcing turnovers, and that’s how it shook off a slow start to sink No. 14 Michigan on Saturday.

The Buckeyes (15-0, 4-0 Big Ten) forced a season-high 27 turnovers and pulled away from the Wolverines to win 66-57 and snap a three-game skid in the rivalry.

Taylor Mikesell scored 16 points and Rikki Harris added 14 as Ohio State overcame its own sloppy first half to go ahead just before halftime and outlast an equally physical Michigan team down the stretch.

“I didn’t know how many times we would turn them over, but I knew that could be a big part of our strategy,” Ohio State coach Kevin McGuff said. “Even it wasn’t turning them over, just trying to wear them out with our pressure and full court (press).”

Ohio State has forced at least 20 turnovers in all but two of their games this season. Cotie McMahon had 12 for the Buckeyes, and Taylor Thierry contributed 10 rebounds.

Cameron Williams paced the Wolverines (12-2, 2-1) with 18 points, and Maddie Nolan and Emily Kiser each chipped in 10.

In the first half, there were a combined 23 turnovers and neither team could make an outside shot until late. Ohio State was 0 for 7 from 3-point range until Harris and Mikesell finally made them with just under four minutes left in the half.

Ohio State was down by as many as eight points in the first quarter, and Emma Shumate hit a 3-pointer from the corner before the buzzer to give the Buckeyes a 30-27 lead at the intermission.

Ohio State went on a 15-3 run and led by as many as 16 before Michigan cut the deficit to 50-41 at the end of the third quarter when Leigha Brown got a steal and Maddie Nolan went to the basket for a layup at the buzzer.

Michigan cut the lead to two with 6:47 left when Nolan hit a 3-pointer, just the second of the game for the Wolverines.

“We knew what we had to do. We had done it earlier in the game,” Harris said. “We allowed a few baskets and allowed them to get closer, gave them a lot more hope than we should have. We just had to toughen up and lock in our stuff so we didn’t turn the ball over as much.”

Ohio State opened it up to 64-52 on Rebeka Mikulasikova’s first 3-pointer with 2:58 left. Michigan had a 5-0 run late, but a pair of foul shots by Harris sealed it. She had seven of her points from the line.

Brown, who averages 15.3 points for Michigan, fouled out with just over 3 minutes left and finished with eight points.

The Buckeyes won despite shooting only 35%. But Michigan could only manage 37.3% from the floor. Ohio State was 19 for 25 from the foul line, while Michigan made only 17 of 28.

“I thought we put them to the free throw line too many times. That really hurt us because defensively we were doing a great job,” Michigan coach Kim Barnes Arico said. “And I thought they really boarded the offensive rebounding exceptionally well late in the game, which really kept possessions alive for them when we were making that run.”

Michigan: The Wolverines’ defense was as a good as it was billed, but they turned the ball over too often thanks to the Ohio State pressure defense and couldn’t make shots.

Ohio State: The Buckeyes had 16 turnovers and escaped despite uncharacteristically poor shooting. Mikesell was double-teamed and hit 4 of 16 from the floor.

The Buckeyes were just 5 for 23 from the 3-point line, with Mikesell hitting 2 of 7. Michigan was worse, making only 2 of 17 from long range.

Ohio State: At Minnesota on Thursday. 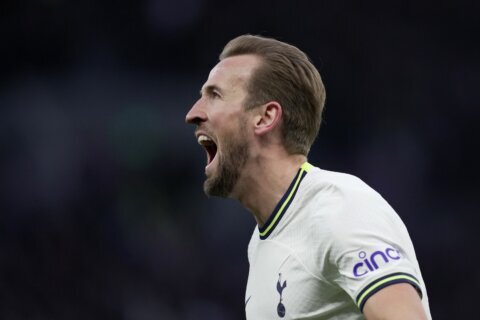