Paolo Banchero had 18 points and six rebounds, and Mo Bamba broke open a close game with three 3-pointers in a 51-second span in the fourth quarter.

The Magic made 17 of 32 3-point shots and scored 72 points in the second half. Anthony, who came off the bench with 4:49 left in the first quarter, led everyone on both teams in points, rebounds and assists, finishing an assist shy of his first triple-double since high school.

“Obviously, he was flirting on the triple-double, but the one thing I love the most is he didn’t chase a stat,” Magic coach Jamahl Mosley said. “He respected the game and just went after what we needed to win.”

“When it happens, it’s going to happen naturally. I wasn’t going to force it,” Anthony said. “I tried to distribute the ball and they made the shots. But all the credit goes to the team. They got me a lot of easy shots and they put me in position to get those rebounds.”

Johnson scored eight points and Doug McDermott hit a couple of 3-pointers in a 24-10 run that gave the Spurs a nine-point lead late in the first half. But the game got away from them quickly in the third quarter.

“We played two and three quarters quarters well,” said Spurs coach Gregg Popovich, “but we have a hard time putting together a 48-minute game. We saw that when the defense collapsed at the end of the third quarter into the fourth when they outscored us in a 10-minute period 46-20. So we’ve seen it before and we saw it tonight.”

Banchero had a 3-pointer and a layup and set up Wendell Carter and Wagner with assists to help the Magic regain the lead late in the third quarter, and Bamba and Anthony quickly stretched it to double figures early in the fourth.

Bamba and Anthony scored 14 points in a 17-1 run that turned a two-point lead into an 18-point advantage with 8:31 remaining.

Spurs: F Jeremy Sochan and C Jakob Poeltl played the second half in foul trouble. … Keldon Johnson played 31 minutes after missing two games with a tight right hamstring. … G Blake Wesley (MCL strain) was back with the team for a second game after being brought up from the G League, but did not play.

Magic: Carter played for the first time since Nov. 18, having missed 18 games due to right plantar fascia. He played 19 minutes, contributing eight points and four rebounds. “The sky is the limit for this team,” Carter said. “I’m just excited to be part of it.” … G Gary Harris had nine points in 21 minutes after missing 11 games with a right hamstring strain. … Wagner had a plus/minus of plus-36, and Anthony had a plus-22. 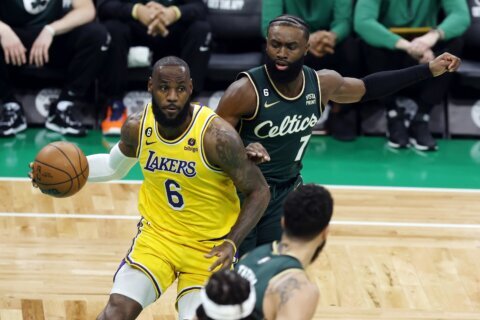