George, Flagler pace No. 12 Baylor in win over Nicholls

WACO, Texas (AP) — Keyonte George scored 21 points, and No. 12 Baylor pulled away from Nicholls State in the second half of an 85-56 victory Wednesday night.

George and Adam Flagler both made four 3-pointers for the Bears (10-2), who never trailed in their final game before opening Big 12 Conference play.

Flagler had 20 points and Langston Love finished with 17 on 5-of-6 shooting. Josh Ojianwuna, a 6-foot-10 freshman forward, added 11 points and 11 rebounds with three blocked shots.

“Josh, what he did tonight, he played within himself and he’s capable of doing that every night,” Baylor coach Scott Drew said.

The Colonels opened the second half with a 10-2 run, when Mark Nelson had a tip-in before four consecutive layups by different players. That got them within 47-41 with 16 1/2 minutes left, but that was the closest they got.

Flagler’s 3-pointer then opened a 31-7 run for Baylor. Nicholls State twice went more than four minutes without a point and missed 19 of 22 shots over that extended stretch.

“We got it back to single digits, then had a couple of wrong steps,” Nicholls coach Austin Claunch said. “We did some things that we’re not coached to do. We overhelped a little bit. They’re such a good shooting team. They make great decisions. When we did make mistakes, they buried us. They didn’t let us off the hook.”

Baylor junior guard LJ Cryer, the team’s third-leading scorer at 14.9 points a game, missed the game because of concussion protocol. He has started all 10 games he played this season.

“When he is back and passes everything and is healthy, he’ll be back playing, hopefully that’s sooner rather than later,” Drew said.

Nicholls State: The two-time defending Southland Conference champions, who played for the first time in nine days, now get another week off before their next game. The Colonels were originally scheduled to play their league opener on New Year’s Eve against Southeastern Louisiana, but that game was moved to Dec. 15 — a game Nicholls won 88-73 — after the Lions requested the change so they could play Vanderbilt on Dec. 30.

Baylor: The Bears have won 80 of their last 84 nonconference home games over a stretch of more than 10 years.

Nicholls State next plays Jan. 5 in a Southland game at Texas A&M-Commerce. 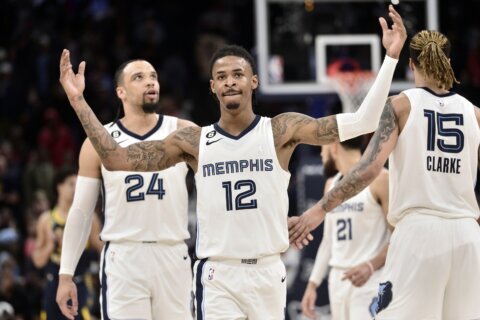