HONOLULU (AP) — Steve Ashworth was perfect from long distance, making three of Utah State’s 11 3-pointers, and scored 12 points in a balanced attack that led the Aggies to an 82-73 win over Washington State in the third-place game of the Diamond Head Classic on Sunday.

Taylor Funk and Trevin Dorius also had 12 points apiece for the Aggies (11-2), Sean Bairstow and Max Shulga each had 11 and Dan Akin was 5-for-5 shooting and added 10 points.

Mouhamed Gueye scored 22 points and grabbed 12 rebounds for the Cougars (5-8), while TJ Bomba was 10 of 12 from the foul line and scored 19 points. Justin Powell added 10 points.

Utah State was 7-of-11 shooting from long range in the first half with five different players connection, to take a 42-29 lead. The Cougars missed all seven of their long shots.

A three-point play by Andrej Jakimovski and a layup by Carlos Rosario on the next possession had Washington State within 50-41 but that was the only time the difference was in single digits in the second half until Bomba scored at the buzzer to cap a 7-0 WSU finish. 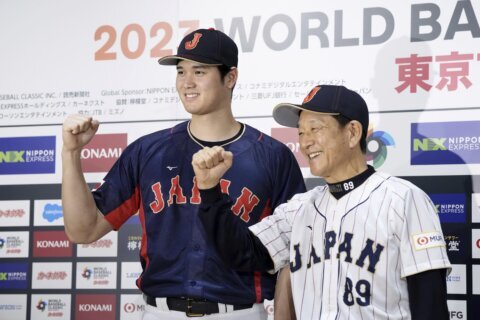 Ohtani set for WBC in Japan, but Angels future uncertain

Germany gets 1st and 2nd at bobsled worlds; US takes 3rd