NASHVILLE, Tenn. (AP) — Juuso Parssinen had two goals and an assist and the Nashville Predators extended their winning streak to three games with a 5-4 victory over the New York Islanders on Thursday night.

“The key is finding ways to win, and we made enough plays tonight to give ourselves a chance to win,” Nashville coach John Hynes said. “I think that’s good on the guys for finding a way.”

The win was Hynes’ 100th with Nashville.

Adam Pelech and Jean-Gabriel Pageau each had a goal and an assist, Cal Clutterbuck, Kyle Palmieri also scored and Ilya Sorokin made 26 saves for the Islanders, who had their two-game winning streak halted.

“We weren’t sharp out of the gate,” Islanders coach Lane Lambert said. “We have to be better, that’s all there is to it to start the game.”

“It was a tough game, and we got the fifth goal, so I think it was the important goal,” Parssinen said. “We got a little bit of breathing room there.”

The Predators came out strong in the first, scoring three times in the first 10 minutes. Forsberg got the scoring started at 1:03. Niederreiter and Sissons added goals. Sissons’ was his first of the season.

“I think we had a great first period, probably one of our best periods all year,” Josi said. “We put a lot of pressure on them, a lot of zone time, a lot of chances, a lot of good looks.”

Pelech had the only goal for the Islanders in the first.

Parssinen has three goals in his first NHL games since getting his first callup to the NHL on Saturday.

Predators defenseman Ryan McDonagh skated in his 800th career NHL game. After beginning his career with the New York Rangers, McDonagh played for the Tampa Bay Lightning, winning two Stanley Cups. After Tampa Bay was defeated in last season’s Stanley Cup Final, McDonagh was traded to Nashville in the offseason.

He recorded one assist Thursday.

After scoring just nine first-period goals through 15 games, the Predators have scored five in the first period in their last two games.

Nashville still has been outscored by opponents 21-14 in the first this season.

Lambert coached with the Predators organization for a total of eight seasons, beginning with the 2006-07 season as an assistant with the AHL’s Milwaukee Admirals. He then served four seasons as Milwaukee’s head coach before joining the staff of then Nashville head coach Barry Trotz for three seasons as an assistant. Lambert followed Trotz as an assistant/associate coach in his stints with the Washington Capitals and Islanders before taking over the top job on Long Island this offseason. 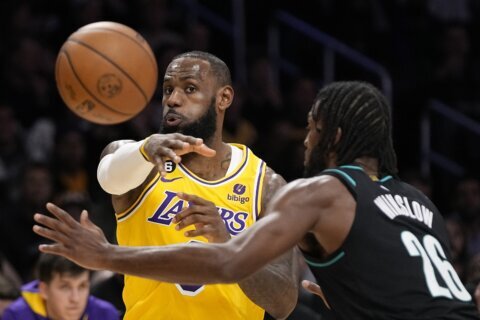