BOSTON (AP) — Taylor Hall scored twice and the Boston Bruins extended their NHL-record streak of home victories to open a season to 13 games with a 3-1 victory over the Tampa Bay Lightning on Tuesday night.

Backup goalie Jeremy Swayman made 27 saves and Brad Marchand added an empty-netter for the Bruins, whose 3-2 overtime win over Carolina on Friday broke the record of 11 set by the 1963-64 Chicago Blackhawks and matched by the Florida Panthers last season.

“For us, it’s more about our process that allows us to have positive outcomes,” Bruins first-year coach Jim Montgomery said of the streak. “We’re together on how we think things should work and we believe in that process.”

Steven Stamkos had a power-play goal, raising his career point total to 999, and Andrei Vasilevskiy stopped 23 shots for Tampa Bay. The Lightning had won six of their last seven games.

“I think these are the (games) you circle,” Tampa Bay center Ross Colton said. “These are the ones you want to measure up against. For the most part, I think we played really well.”

Hall snapped off a shot from the slot for the eventual winner 2:49 into the third period after collecting a pass from Nick Foligno, who started to circle the net before quickly turning and centering the puck.

“I think we’re showing, that no matter who we’re playing, that its really about us and how we play,” Hall said. “We’re going to get team’s bests, they’re going to come hard. I think we have the confidence that if we play our game, we’re probably going to win.”

Swayman came across the crease, flashing his right pad to make a splendid stop on Corey Perry with just under seven minutes left in the game.

“That’s the best he’s looked this year to me,” Montgomery said of his netminder. “Very calm in the crease.”

Tampa Bay had tied it on Stamkos’ score with 1:40 left in the second period.

Swayman stopped about four or five excellent chances in the period before Stamkos scored on a one-timer off a pass from Nikita Kucherov from near the left circle.

“Even though we’ve had success in the win column, it doesn’t mean guys haven’t gone up and down in different mental states and stuff,” Swayman said. “They’re doing what it takes to perform on the ice, and that’s special.”

In an opening period with few quality scoring opportunities, Hall made it 1-0 just 67 seconds into the game. Positioned in the slot, Hall tipped in Brandon Carlo’s shot from the point, with the puck dropping from about waist high and going between Vasilevskiy’s pads.

Vasilevskiy robbed Jake DeBrusk’s short-handed bid midway into the period with a blocker stop when the winger broke free for a wrister between the circles.

DOWN BUT NOT OUT

Bruins standout defenseman Charlie McAvoy was down for a while after the puck deflected under his visor and hit him on the bridge of his nose. He got up slowly, headed down the runway toward the locker room, but quickly came back and didn’t a shift.

NOTES: Stamkos, who had two goals, including the game-winner in a 6-5 OT victory at Buffalo on Monday night, notched his 26th career goal against the Bruins. … Boston defenseman Derek Forbort returned to the lineup after missing the previous 11 games with a broken finger, and forward Trent Frederic was back after being sidelined the last two games with an undisclosed injury.

Lightning: At the Philadelphia Flyers on Thursday. 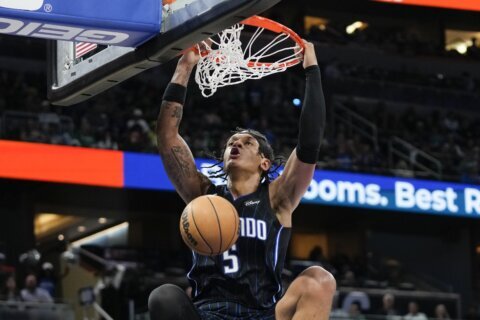 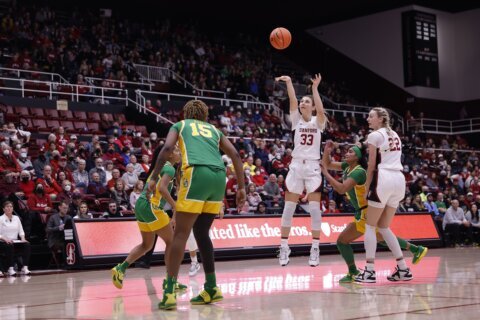