WOLVERHAMPTON, England (AP) — Wolverhampton Wanderers moved out of the English Premier League relegation zone and left Nottingham Forest there after a Ruben Neves penalty separated the two strugglers by 1-0 on Saturday.

Neves converted from the spot after 56 minutes at Molineux to secure the manager-less home team only its second league win.

Forest missed an opportunity to share the points when Brennan Johnson’s 79th-minute penalty was saved by Jose Sa.

Remarkably, Sa has been playing with a broken wrist since the second game of the season and shrugged off the injury to produce the pivotal moment.

“Jose Sa is a fantastic goalkeeper, he showed it last season, he’s showing it again, importantly he saved a really important penalty for us,” Neves said.

Interim managers Steve Davis and James Collins are in charge of Wolves until a successor is found for Bruno Lage, who was fired this month.

The pair has lifted the mood around the club after securing a crucial win against a rival that is also fighting for survival.

Wolves were close to going ahead in the first half when Max Kilman’s header struck the post.

But the game came down to two penalties, both awarded after VAR checks.

Forest dropped to the bottom before kickoff after Leicester drew with Crystal Palace 0-0.

“We’re trying to improve every day and stick to what we believe is going to be the right way to go and we’re navigating our way through to that,” Forest manager Steve Copper said. “The players will want to take responsibility as well and they’ll be frustrated with the first half performance.” 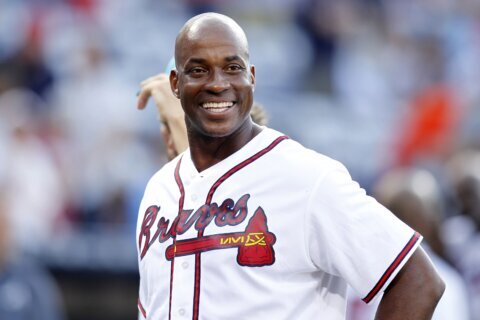