The YouTuber-turned-boxer may have taken an unorthodox path to the sport, but it’s getting harder to deny that the 25-year-old has some legitimate skills in the ring.

Paul (6-0) won a unanimous decision against Silva — punctuating the victory with his eighth-round knockdown — as he continues his quest for respect after starting to take boxing seriously just three years ago.

“It’s surreal,” Paul said. “I don’t think it’ll hit me until a couple weeks from now. I feel like I’m living in a movie. (Silva) was the one that told me I could accomplish anything if I set my mind to it. You couldn’t have written this in a story.”

“I had to go in there and match his heart tonight,” Paul added. “The heart that I saw through the TV screen when I was a kid.”

The entertaining fight went the eight-round distance and the final round was a doozy, with Paul’s big right hand sending Silva to the canvas. The 47-year-old Silva was able to continue and even landed some punches in the final minute, but it wasn’t enough to sway the judges.

“That wasn’t even the hardest punch of the night,” Paul said. “It was just the timing.”

The fight was slow to develop with Silva rarely throwing punches in the opening round, but the Brazilian landed a few hard shots in the second round, dancing around the ring while avoiding Paul’s biggest blows. Both fighters exchanged some taunts in the early rounds but the bravado gave way to concentration as both realized it would be a lengthy fight.

Paul held his own during the middle rounds — with blood coming from Silva’s nose — but couldn’t land most of his powerful swings. That started to change in the later rounds as the younger Paul gained confidence and the punches started connecting.

“He took so many hard shots throughout the whole fight,” Paul said. “The dude is a real dog. You see what happens to everyone else that gets hit with that. He’s the toughest guy in the world but I just wanted it more.”

It was a spectacle in front of more than 14,000 fans that mixed boxing and all different types of celebrity, but the main draw was the 25-year-old Paul, who has shown a surprising knack for skills in the ring. He’s also a master of self-promotion, riding up to Wednesday’s open workout on a horse and walking around Desert Diamond Arena on Saturday with two people in gigantic Transformers-like outfits behind him.

Silva (3-2) was the fan favorite, receiving loud cheers when he entered the ring. He built his fame as a UFC star but got his start in boxing and returned to the sport in 2020.

“That’s the game,” Silva said. “Sometimes you win, sometimes you lose. But nothing will change in my life. I’ll continue training hard because I’m born for this.”

The 30-year-old Bell — a two-time All-Pro who had his best football years with the Pittsburgh Steelers — was making his debut in the ring. He lost a unanimous decision to Hall in his four-round cruiserweight bout.

“I thought I did OK,” Bell said. “That’s a great fighter right there. I think he got the best of me.”

Paul only took up boxing in earnest in December 2019, but he has the financial resources and the determination to do it big. He claims to have a 30-person team supporting his training, which is largely done at the Cleveland native’s base in Puerto Rico. 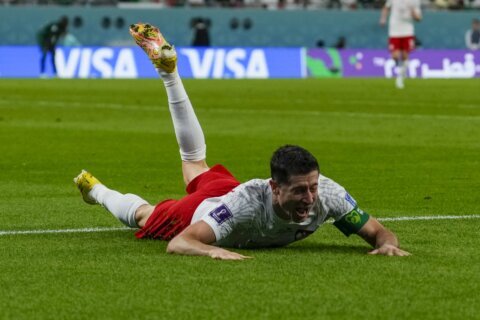