MANCHESTER, England (AP) — Manchester City manager Pep Guardiola said fans’ chants related to the Hillsborough Stadium disaster do “not represent what we are as a team or as a club,” amid continuing fallout from the bad-tempered match against Liverpool.

City has yet to publicly apologize after some of its fans were heard singing songs about the 1989 tragedy, which led to the death of 97 Liverpool supporters, during Liverpool’s 1-0 win at Anfield in the Premier League on Sunday.

Guardiola was asked about the issue on Friday and said he didn’t hear the chanting.

“If it happened, I am so sorry,” he said. “It does not represent what we are as a team or as a club, if this happened. But don’t worry, we can behave perfectly (after) our mistakes, without a problem.”

The Hillsborough Survivors Support Alliance said it contacted City on Monday and asked the club to make a public statement condemning the songs about the disaster.

The group said it received an emailed reply on Thursday, in which City said it condemned “the chanting or singing of songs with connotations to footballing tragedies and will continue to sanction those individuals who are found to be responsible for such behavior.”

In the email, published by the Hillsborough group in a Twitter post, City said it would contact season-ticket holders and members ahead of the next match against Liverpool to reiterate that this type of hateful chanting and singing has no place in the game.

The club will “ask the vast majority of our fans who would never engage in such behavior, to call out and report any individual that chooses to do so,” City said.

The rivalry between City and Liverpool has grown into one of the most bitter in English soccer, and it spilled over in Sunday’s game.

After the match, Liverpool condemned the behavior of the away fans regarding the offensive chants relating to Hillsborough as well as what the club said was “graffiti of a similar nature” on the concourse in the City fans’ section.

Asked if the relationship between the clubs had grown “toxic,” Guardiola said: “I don’t think so, from our side. I’m pretty sure of that.” 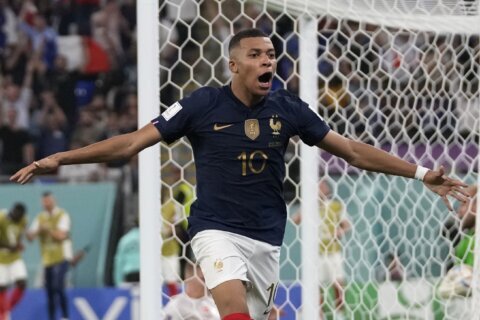