Griezmann lifts Atlético to 3rd after win at Bilbao

BARCELONA, Spain (AP) — Finally free to play as many minutes as his coach wants, Antoine Griezmann scored to help Atlético Madrid win at Athletic Bilbao 1-0 and move ahead of the Basque club into third place in the Spanish league on Saturday.

Griezmann was set up by Álvaro Morata in the 47th minute. The Spain striker passed back for his unmarked teammate to slot in the winner. Atlético’s defense did the rest by shutting down Bilbao and its Williams brothers, with both Iñaki and Nico unable to create threats with no chance to attack on the break.

Diego Simeone’s side was three points behind Barcelona and Real Madrid before the front-runners clash in Spain’s capital on Sunday.

Atlético bought Griezmann’s rights on Monday to end a loan deal from Barcelona that provoked a contract dispute between the clubs. While Barcelona was seeking 40 million euros if Griezmann played over a certain amount of minutes, Atlético resisted giving Griezmann extra minutes. Barcelona eventually agreed on 20 million euros to make Griezmann’s move permanent.

In Atlético’s starting XI, Griezmann played the full 90 minutes for just the third time this season.

The game at San Mamés Stadium was vintage Simeone: One flash of brilliance in attack by Morata and Griezmann combined with a rock-hard defense that never got nervous absorbing pressure from the host.

When Bilbao did produce some late shots, goalkeeper Ivo Grbić was stoic after replacing Jan Oblak, who was dazed following a knock. Left back Reinildo also bailed out Atlético by blocking two late strikes.

“This is what we are: Run, defend in a bloc, and attack. Today we played a great game,” Griezmann said. He admitted that not playing much due to the contract dispute had been “frustrating.”

João Félix went on as a substitute for Atlético in the 82nd after Simeone said the Portugal forward wasn’t playing as many minutes because he needed to play better.

The loss was just the second for Bilbao, which slipped to fourth place, since Ernesto Valverde returned for his third stint in charge.

A long-range strike by Nemanja Gudelj proved enough for Sevilla to beat Mallorca 1-0 on the road and get its first victory in three games since Jorge Sampaoli returned as its coach.

Gudelj struggled at the start of the season as a central defender under Julen Lopetegui, who was replaced by Sampaoli last week. Sampaoli moved Gudelj into midfield and the Serbia international responded with an eye-popping goal from deep in the second half.

Sevilla’s second win in nine rounds got it out of the relegation zone.

Sampaoli, however, said he still had work to do after his scheme to play without a striker failed to create many scoring opportunities.

Edinson Cavani scored his first goals since joining Valencia this summer with his aim set on playing for Uruguay at the World Cup.

The 35-year-old striker was making his fourth appearance for Valencia. He got his first goal from a penalty and added a second goal with a nice header. Still, it wasn’t enough to get the win as Elche midfielder Pere Milla also struck twice for a 2-2 draw.

American midfielder Yunus Musah, recovered from a groin injury, made his first start for Valencia ince Sept. 10 and played until the 75th minute.

Jorge Almirón debuted as Elche’s new coach in his return to the club he left in February 2021. The stalemate at Mestalla Stadium left Elche in last place and still winless this season.

Also, Cristhian Stuani converted a penalty at the end of stoppage time to snatch Girona a 1-1 draw with visiting Cádiz. 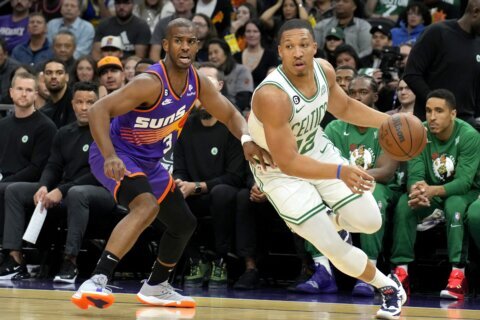