NOTTINGHAM, England (AP) — Widely expected to be fired as Nottingham Forest coach, Steve Cooper instead got a contract extension Friday from the Premier League’s last-place club.

Forest said in a statement Cooper was given two more years on a deal that now runs through the 2024-25 season.=

Four days after a 4-0 loss at previously winless Leicester seemed likely to end Cooper’s time at Forest after barely one year, the club said: “It is now important that our focus is solely on football.”

“I know there have been a lot of questions over the last few weeks and months so it puts an end to them,” Cooper said at a news conference ahead of hosting Aston Villa on Monday.

Cooper took over the two-time European champion at the bottom of the second-tier Championship in September 2021 and led a revived team to promotion via the playoffs.

However, stabilizing Forest in England’s top division after a 23-year absence has been difficult with a staggering 22 new players signed at a cost of $150 million.

Forest has won just one of its eight games and conceded 21 goals — 16 of them in its last four matches.

“Obviously we are on a poor run of form, let’s not hide away from that,” Cooper said. “That is the thing that is in my mind more than anything.”

The 42-year-old former England youth teams coach has been popular at the City Ground after guiding Forest to promotion.

Cooper now seems to have time and job security from the club’s owner, Greek businessman Evangelos Marinakis, to try to make his squad gel after breaking the British record of most signings in one transfer window.

“Some of the guys have only met each other these last couple of weeks,” Cooper said after the loss at Leicester, when he acknowledged his job was under threat. 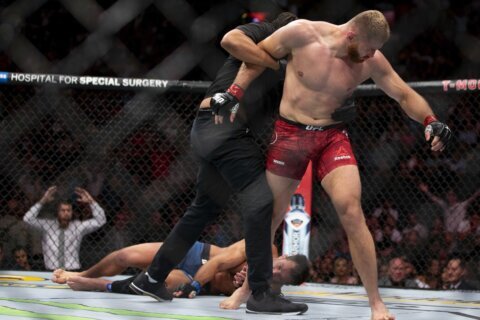