Start of soccer game in France delayed due to crowd fights

NICE, France (AP) — The start of a match between Nice and Cologne in the Europa Conference League on Thursday was delayed because of fights among supporters in the stands at Allianz Riviera stadium.

The kickoff was pushed back by 55 minutes to 7.40 p.m. local time because of crowd disturbances. Fans were fighting before the start of the match at the Nice stadium.

French media reported that 18 people were injured. The game ended in a 1-1 draw.

“OGC Nice condemns in the strongest possible manner the incidents that took place before the match, which began with damage in the city, followed by the forced entry of dozens of hooligans from the area reserved for Cologne supporters into the presidential stand,” the French club said in a statement.

“Stunned by this outburst of violence, even though they had done everything possible to welcome the FC Cologne fans in the best possible conditions, OGC Nice expresses its distress for the Nice public, who witnessed and were victims of these incidents and were forced to wait nearly 45 minutes before being allowed to enter their stadium before kick-off,” the statement continued.

The German club said it “condemns every form of violence in the strongest possible terms. We stand for a sporting, fair and respectful behavior with one another. We apologize to all the peaceful fans who had made it a football festival up until this point.”

With the teams in their dressing rooms before the match, Cologne captain Jonas Hector came out and urged fans to remain peaceful, according to the Cologne’s English-language Twitter account.

“We can’t wait to play this game with you. We all want the game to take place. But we have to also say that what happened is not good. We don’t want to see that,” Hector said. 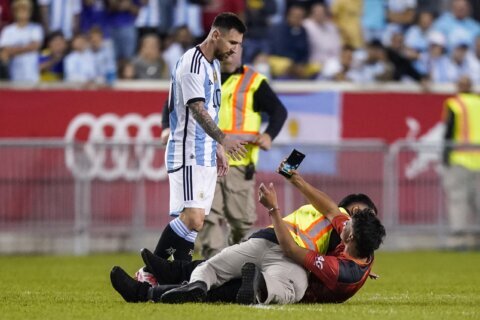