BOSTON (AP) — For one day, they were all in the building: Patrice Bergeron, Brad Marchand, Zdeno Chara, Tuukka Rask and other members of the Bruins’ 2011 Stanley Cup championship team.

What Boston fans can expect to see on the ice this season will be much different.

Marchand, the team’s No. 1 scorer last season, will miss the first six weeks recovering from hip surgery. Rask returned only to watch Chara sign a ceremonial contract before joining him in retirement. Bergeron spent most of the summer with one skate out the door but is back for another run at the title.

Top defenseman Charlie McAvoy will miss about two months while recovering from shoulder surgery. Matt Grzelcyk also had shoulder surgery but could be back a bit earlier than that. Mike Reilly had ankle surgery but is expected to be ready for the start of the season.

The Bruins hope they can weather the first two months until they get healthy.

The biggest offseason move was Bergeron deciding to return.

The team captain teased a retirement despite putting up another strong season in 2021-22, scoring 25 goals with 40 assists and winning his fifth Selke Trophy. Even at 37, his return solidifies the offense — and a locker room that will be adjusting to first-year coach Jim Montgomery.

“I don’t have to go into the locker room very much if he comes back. That was the main takeaway,” Montgomery said after he was hired. “He’s got good control of what’s going on, and how to lead.”

Also coming back is David Krejci, who spent last season playing in his home Czechia. Former Devil Pavel Zacha signed as a free agent and he will help fill in on the top line until Marchand is healthy.

Bruins general manager Don Sweeney fired coach Bruce Cassidy, who led the team to at least 100 points in four of the past five seasons (missing the mark only in the pandemic-shortened 2020). In his place is Montgomery, the former Stars coach.

After losing his job in Dallas for “unprofessional conduct” and entering rehab for alcohol abuse, Montgomery gets a fresh start with a team that went to Game 7 of the Stanley Cup Final in 2019, had the league’s best record the following year and won 51 games last season.

Montgomery will be judged on whether he gets more out of young players like Jake DeBrusk and Brandon Carlo, who bristled against Cassidy’s style.

The Bruins liked what they saw of Jeremy Swayman, who went 23-14-3 as a rookie last year while splitting time with Linus Ullmark, who went 26-10-2. Swayman is 23 — five years younger than Ullmark — and making about $4 million more.

At least this year they don’t have the specter of Rask looming over them. The 2014 Vezina Trophy winner aborted his attempt to come back from a hip injury in the middle of last season.

Although they open in Washington against the Capitals, the Bruins play six of the next seven games at home. The also finish with five of six at home, with their road finale at Carolina on March 26. The Bruins play the Pittsburgh Penguins at Fenway Park on Jan. 2, making the home of the Boston Red Sox the first venue to host the Winter Classic twice. 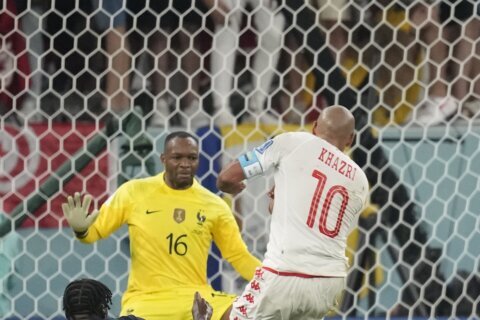