MARSEILLE, France (AP) — Riot police intervened when opposing fans launched flares and fireworks at each other before kickoff of Marseille’s home game against Eintracht Frankfurt in the Champions League on Tuesday.

Other sections of the home crowd egged on their Marseille counterparts, with some cheering as flares and firecrackers landed in Frankfurt’s away section.

Similar incidents happened again late in the game with loud bangs drowning out several requests for calm over the stadium loudspeakers. Frankfurt’s traveling support of around 3,000 was held inside Stade Velodrome long after the German team’s 1-0 victory.

Frankfurt also issued a statement distancing itself from an alleged Nazi salute by a fan captured on video before the game.

“Eintracht Frankfurt stands for tolerance and diversity and takes a clear stance in the fight against racism, antisemitism and discrimination,” the team said. “The club distances itself clearly from the isolated incident before the UEFA Champions League game … where one person performed a gesture understood to be a ‘Hitler salute.’ Antisemitic ideas are in stark contrast to the unequivocal and unshakeable values of the club and its roots.”

Frankfurt added that the fan “emphatically rejects the accusation of antisemitic intentions” and that the club will “thoroughly review this incident.”

Leading up to the match, a large-scale police operation successfully contained the risk of fan violence in the city itself. After a stadium brawl in Nice last week left dozens injured, authorities were on high alert for this match, classified as high risk.

Tensions were elevated by late Tuesday afternoon when dozens of police marched a group of Frankfurt hardcore fans — called “ultras” — numbering around 500 up a long road, where those with tickets were taken to the game in coaches under police escort. Those without tickets stayed on site at a fan zone with police nearby.

Earlier, Frankfurt ultras congregated in one of the city’s main squares with police blocking every entry point and preventing any ultras from leaving it until hundreds of riot police escorted them away at around 4:30 p.m. There was one brief skirmish with locals on the way.

Violent elements from Marseille and Frankfurt got into fan clashes last season, and vigilance was ratcheted up in France following last Thursday’s mass brawl between ultras from Nice and Cologne before a Europa Conference League game.

Marseille police said five arrests were made Monday night when large groups from Frankfurt and Marseille were narrowly prevented from confronting each other. Dozens of police vans were stationed around the city’s Old Port area with some armed police present. Frankfurt’s risk group was then held by police for several hours outside its hotel.

Last week, violent clashes inside Nice’s stadium between ultras groups led to 32 injuries, one of them serious after an ultra fell from the stands.

It led Marseille midfielder Mattéo Guendouzi to call for calm before his team’s game.

“I hope there won’t be any disorder like we saw when Nice played Cologne,” he told France 3 television.

Away supporters from Frankfurt were told not to wear any club colors around the city before the game and a prefectural decree partially banned alcohol sales from 2 p.m. Tuesday until kickoff at 9 p.m. This was not adhered to, however, and German fans were drinking throughout the day.

Similar preventative measures had failed to prevent huge brawls outside Stade Velodrome when Dutch club Feyenoord visited Marseille last season, because hundreds of Feyenoord hooligans traveled without tickets with the intention of fighting. They did not wear club colors and gathered in big numbers.

It was the scene of rampaging battles when Russian hooligans attacked English fans drinking around its many cafes at the European Championship in 2016, in scenes resembling fights between English hooligans and local gangs from Marseille during the 1998 World Cup.

With its myriad of side streets and alleyways that peel away from the port to the stadium itself, Marseille is very difficult to police.

Clashes can happen the night before the game itself, when there are less police. Marseille ultras fought violently with counterparts from Lazio late at night in 2018, and did so last season against fans of Feyenoord and Greek side PAOK Thessaloniki.

In April, Greek ultras from PAOK numbering around 200 managed to arrive in coaches despite agreed restrictive measures such as police checkpoints.

PAOK clashed with Marseille’s ultras and the police the day before the game and inside the stadium. Local ultras even tried attacking PAOK’s ultras at their hotel.

The violence in Marseille continued in May when Feyenoord came for the Europa Conference League semifinal return leg, some hooligans arriving two days before. Their hooligan group, among the most violent in Europe, numbered 400.

Before that game, they fought Marseille’s ultras outside the stadium several times. Marseille groups then attacked riot police afterward, as they did after the Galatasaray match, in an attempt to reach ultras held back inside the stadium by police.

Frankfurt’s hooligan element, known as “Brigade Nassau,” has long been active and clashed with rivals from Polish club Lech Poznan in what appeared to be a pre-arranged meet on Aug. 24. Poznan’s hooligan element stopped off in Germany on the way to a game in Luxembourg against Dudelange.

Frankfurt’s hooligans have previously brawled with established hooligan groups like Zenit St. Petersburg’s “Music Hall” in pre-arranged fights or been involved in forest fights with rivals from Cologne and other German groups.

Before last season’s Europa League semifinal, there were clashes around Frankfurt with supporters from West Ham.

The Spanish city of Sevilla witnessed violent scenes around the final as some 300 cagoule-wearing ultras from Frankfurt attacked fans from Scottish club Rangers as the season ended amid fan violence. 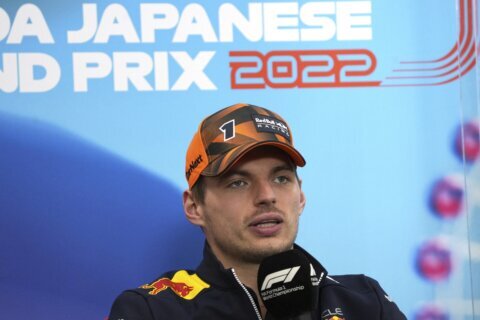 F1 spending-cap ruling coming as drivers at Suzuka weigh in