Kane, Toews have no plans to leave the Blackhawks — yet

CHICAGO (AP) — Chicago Blackhawks stars Patrick Kane and Jonathan Toews haven’t started making plans to leave the only NHL team they’ve ever played for. At least, not yet.

The franchise’s marquee names said they aren’t even thinking about it as rebuilding Blackhawks opened training camp Thursday.

The 33-year-old Kane and 34-year-old Toews are in the final years of eight-year, $84 million contracts with no movement clauses. Both will become free agents at the end of the 2022-23 season, unless they consent to a trade to another team before then.

Blackhawks GM Kyle Davidson tore down his roster following a disappointing 2021-22 season, in which Chicago had been expected to contend for a playoff spot but finished at 28-42-12 and 68 points.

While Kane and Toews — anchors of the 2010, 2013 and 2015 Stanley Cup championship teams — have talked to Davidson about his long-term plans, but neither has asked for a trade to a contender, let alone provided a list of preferred destinations.

“I don’t think it has gotten to that point,” said Toews, Chicago’s captain. “Not close to it this summer and I don’t think it will for quite some time this season. The thought for myself personally has been to kind of keep trudging forward and keep getting better … and working through a lot of stuff and playing at the pace the ability I know I can.”

Toews said he feels stronger than he did at last season’s camp, when he came back from chronic immune response syndrome, a condition that kept him out of the pandemic-shortened 2020-21 season. He scored a career-low 12 goals and 37 points in 71 games last season.

Kane’s stock and appeal to a contender should be higher. His offensive skills were still dazzling last year, even on a weak team, when he posted 26 goals and 66 assists for 92 points, 15th best the league.

“There really hasn’t been much discussion about anything with my agent (Pat Brisson) or my parents or my family,” Kane said. “I think we all know the situation. I play. You know what potentially could happen, but it’s not really anything I’m thinking about yet. … I know people are counting this team out and what we can do, but I think we have a lot of motivated players and a motivated coaching staff.”

Kane and Toews are optimistic the Blackhawks will be better than expected under first-year coach Luke Richardson.

But both were upset Davidson dealt young sniper Alex DeBrincat to Ottawa and 21-year-old center Kirby Dach to Montreal. Toews said he felt “a lot bit of shock, a little bit of anger” when Dach, the No. 3 pick in 2019, was traded.

But that hasn’t moved the needle on either star’s plans, for now. And Richardson wants Kane and Toews to set examples.

“I’m just here trying to coach them, making sure they’re happy and engaged with the team,” Richardson said. “They’re great players and we want to use that as a learning point for younger guys to see how they play at their best.”

Kane and Toews knows rumors will fly. Kane dismisses them as “noise” he plans to block out, ditto for Toews.

“You guys just go ahead and do your job” Toews said, deadpan, to reporters. “Right now I’m not going to try and hype anything up. I’m not trying to kill anything either.”

NOTES: Chicago defenseman Jake McCabe was on the ice for skating and non-contact drills, although the team said last week he will miss the start of the season after he had cervical spine surgery. There was no word on when exactly McCabe had the operation. … The Blackhawks said defenseman Ian Mitchell is expected to miss six weeks with a left wrist injury. … Forwards Colton Dach and Paul Ludwinski sat out under concussion protocol. 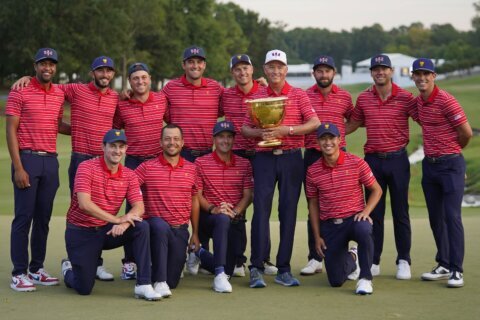 Final day of the Presidents Cup at a glance