Alcaraz, Ruud meet for US Open title and No. 1 in rankings

Carlos Alcaraz or Casper Ruud will win his first major title, then move to No. 1 in the ATP rankings on Monday. If it’s the 19-year-old Alcaraz, he would become the youngest Grand Slam champion since fellow Spaniard Rafael Nadal was also 19 when he won the French Open in 2005, and the youngest No. 1 since the computer rankings began in 1973. He has won three straight five-set matches, but the last man to do that leading into a Grand Slam final then lost, when Roger Federer beat Andre Agassi in 2005 at Flushing Meadows. Ruud gets his second chance at a first major title, having lost to Nadal in June at the French Open. He will become the first Norwegian player to be No. 1 with a victory, but he is 0-5 against top-10 players in Grand Slam matches.

20 — Consecutive sets won by Swiatek in finals after she lost in 2019 in the first one of her career.

“I was joking when I said I don’t like her. I’ll forgive her when she gives me a Rolex or something.” — Ons Jabeur, who had joked in her postmatch interview that she didn’t like Swiatek at the moment. 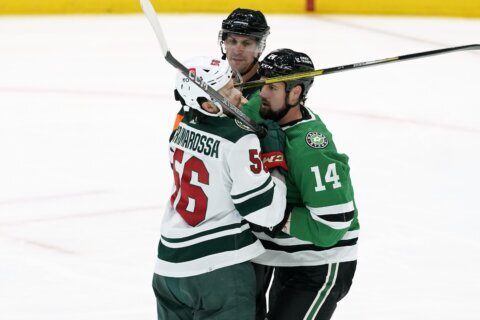 Behind the stripes: What 3 NHL officials enjoy off the ice