BERLIN (AP) — Schalke was given a rude welcome back to the Bundesliga with a 3-1 loss at Cologne where…
Listen now to WTOP News WTOP.com | Alexa | Google Home | WTOP App | 103.5 FM

BERLIN (AP) — Schalke was given a rude welcome back to the Bundesliga with a 3-1 loss at Cologne where VAR decisions upset the promoted visitors on Sunday.

Rodrigo Zalazar thought he’d put Schalke ahead in the 10th minute but the goal was ruled out through VAR as Maya Yoshida was adjudged to have been offside and blocking goalkeeper Marvin Schwäbe’s view of the ball.

It was an escape for Cologne, which also gained from the video assistant referee when Dominick Drexler was sent off for a foul on Jonas Hector. Slow motion replays did not help Drexler’s case and Hector tried to console the upset Schalke player as he walked off.

Luca Kilian got the opener early in the second half before VAR helped Cologne again when Florian Kainz’s goal was awarded after being previously chalked off for an apparent offside.

It was too much for Schalke sporting director Rouven Schröder, who was booked when his protests crossed a line.

Marius Bülter pulled one back for Schalke before Dejan Ljubicic got Cologne’s third in the 80th. The Austrian’s shot came off the post and went in after rebounding off Schalke goalkeeper Alexander Schwolow’s heel.

Cologne announced before the game that it had agreed in principle on top-scorer Anthony Modeste’s transfer to league rival Borussia Dortmund.

Naouirou Ahamada’s first goal for Stuttgart since joining from Juventus in 2020 earned the home team a point and frustrated the visitors, who were keen to match Bayern Munich and Borussia Dortmund by winning their opening game.

The visitors made a good start with Christopher Nkunku opening the scoring in the eighth minute. But Ahamada played a one-two with Saša Kalajdžić before curling his shot inside the right post to equalize in the 31st.

Though Leipzig went on to create more chances, the visitors were fortunate that Stuttgart defender Konstantinos Mavropanos’ effort came back off the post before the break. 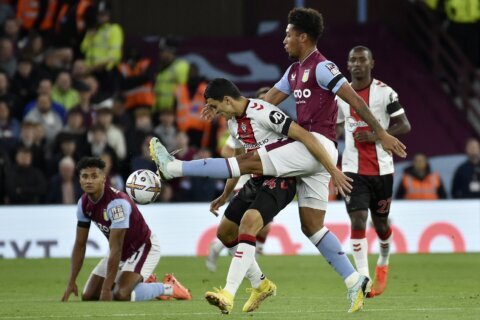